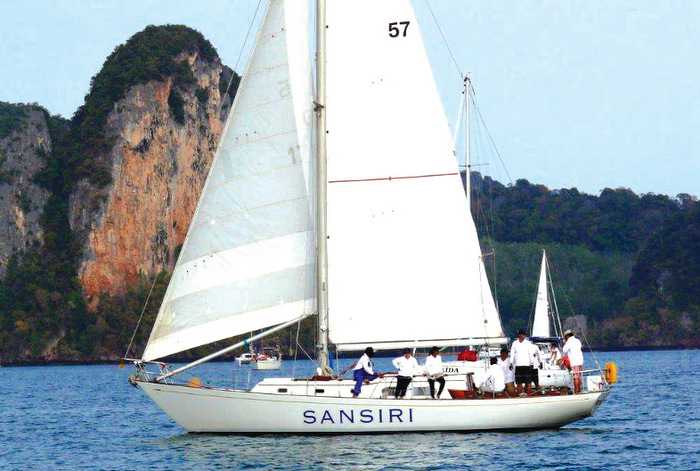 PHUKET: Sailors last week were once again tested by contrary winds and complicated tidal flows during Ao Chalong Yacht Club’s (ACYC) Sunday race series. One of the slowest downwind spinnaker starts got the fleet of six boats off on an in-harbor course of three windward leewards.

Rounding marks for Race 7 Series 2 included a yellow buoy off the Rawai Mosque and the Baan Nit Safe Water Mark. Club race officer Alan Carwardine called David Rucker on the finish-boat to advise of a shortened course and to finish the two competing monohulls at the Baan Nit channel marker. Also calling it quits there was the catamaran Nina whose crew struggled in the light conditions.

There were no major tussles on the day apart from an interesting bit of competition between Nina and the 27-foot Catalina Aqua that had no right to be that far up the fleet, but somehow managed to do so, giving both crews someone to work against.

At one point, Aqua was so close that the salsa music playing on their stereo prompted Nina‘s foredeck crew to dance to the music on Nina‘s bow nets. Aqua was probably lucky to be there at all considering her rescue in severe weather by the Royal Thai Navy some years back (story here).

It was a hot, slow and tough day for all including the front-runners Hurricane who led from beginning to end, followed by Adrenaline and Galeforce. It can be a hard day in paradise sometimes!

With only two more races in the series, positions are tight with Hurricane in the lead and Nina in second with Adrenaline holding down third overall in multihulls. In the Monohull division Aqua is enjoying first place with Sansiri right behind her.

Hurricane and Adrenaline will both miss one of the remaining races due to their commitments to race in the Raja Muda Regatta in Malaysia (click here) and the Kings Cup Regatta in Phuket (click here), which will have an impact on their final results.

Next race is on November 9. Anyone interested in joining as crew, please be at the club at 10:30 for the skippers briefing. No skills required. Visit www.acyc.asia. Don’t forget the Sunday Roast.