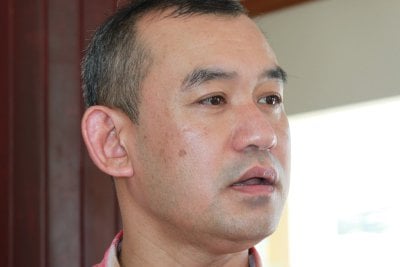 PHUKET: Police have arrested four people in connection with the theft of 30 million baht of jewelry in Phuket yesterday morning while they were heading for the Malaysian border.

Phuket Provincial Police Commander Chonasit Wattanavrangkul confirmed to the Phuket Gazette that the suspects were arrested by Trang Highway Police officers at a checkpoint in Sikao District, in Trang province.

The three switched getaway cars after fleeing the scene in a Toyota Vios rented in Phuket, Maj Gen Chonasit said.

“After dumping their initial getaway car in Patong, the three headed off-island in a Toyota Fortuner they also rented in Phuket,” he said.

But that didn’t fool the Phuket investigators. CCTV footage showing the thieves leaving the scene gave away the Toyota Vios license plate, leading police on a paper trail to discover the rented Fortuner and its license plate registration.

“We contacted all agencies – including Immigration, Tourist Police and Highways Police – and asked them to keep an eye out for the rented Fortuner,” Maj Gen Chonasit said.

A search by officers discovered the stolen jewelry, including gold, diamonds and other precious gems, in two separate bags inside the car.

Police have arrested at least four people travelling inside the vehicle: one Russian man, two Malaysian women and one Thai man.

Police have yet to name the suspects arrested.

However, police have also reported that one of the Malaysian women escaped custody.

“While the police officers were questioning the suspects, one of the Malaysian women, the large one, asked to use the bathroom at the police station.

“But she ended up running away from the station. We are now searching for her,” Col Jakkrapan said.

Phuket Police are now escorting the suspects back to Phuket.

A press conference is expected to be held later today.

No drugs, no phones, Phuket Prison to gain ‘White’ status