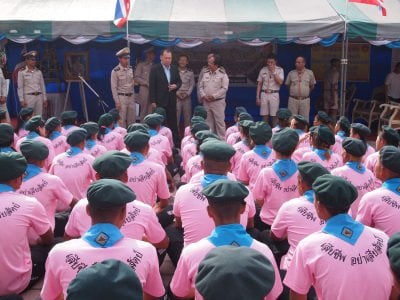 PHUKET: Phuket Prison is to be awarded “White Prison” status after regular inspections of the provincial detention facility declared it free from drugs and illegal mobile phones.

Mr Somsak also explained that the objective of the scout training for young inmates was to rehabilitate young offenders and change their daily behavior.

“We want these individuals to see themselves as being valuable, have responsibility and be able to integrate with other people,” Mr Somsak said.

“We also hope that those who have a history of using drugs will apply the scout rule in their daily lives. We want them to gain an inner strength,” he said.

“Phuket has held scout training twice with 35 youngsters attending each training session. We have found that young offenders who passed the training can integrate well when living with others,” Mr Somsak added.