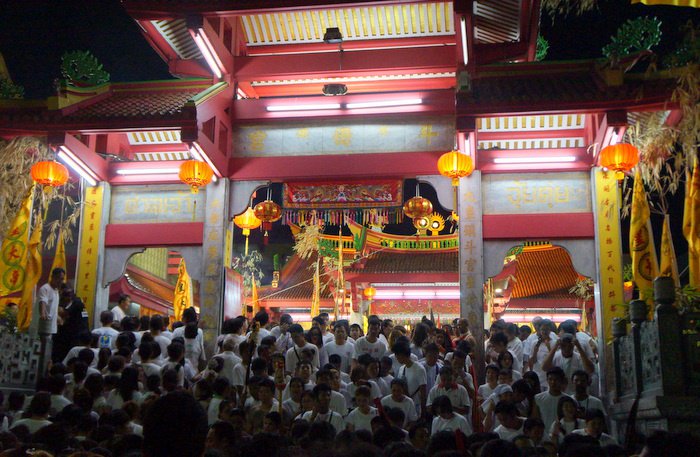 PHUKET: The Vegetarian Festival will kick off in less than two weeks across the island, with yellow and red flags being raised to mark the popular annual event.

This year the festival will take place during October 13-21 with the special addition of a parade in honor of HM King Bhumibol Adulyadej’s 88th birthday on October 14.

The annual festival will begin with a ceremonial raising of go teng poles to invite the Jade Emperor and nine Emperor Gods to descend to our earthly realm on October 12.

The nine-day event attracts thousands of visitors to Phuket to witness the festivities, which include fire-walking, bladed-ladder climbing, hundreds of stalls fully stocked with vegan foods and processions at various locations across the island.

On the last day of the festival, all participating shrines stage street processions to Saphan Hin between 11:45pm to midnight to bid the gods a ‘grand farewell’ before they proceed heavenward.

The final processions are renowned for the large number of firecrackers set alight by devotees and revelers as the processions pass by.

The schedule for street processions by Chinese shrines from October 14 onwards is as follows:

Kristi Matzenberger tastes a few of the weird and wonderful dishes on offer at Phuket’s Vegetarian Festival. Video: PGTV

The schedule for fire-walking events:

10 Rules of the Vegetarian Festival

Underpass construction digs in with delays