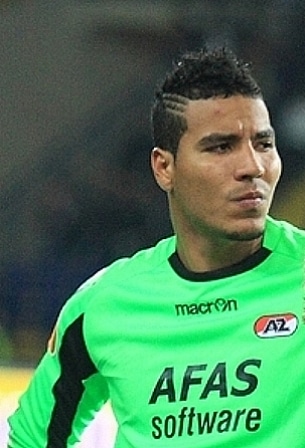 PHUKET: Memories of Eric Cantona’s attack on Crystal Palace supporter Matthew Simmons – when he jumped into the crowd kung-fu style – came flooding back at a Dutch KNVB Cup match on Wednesday evening.

With seven minutes remaining in the first half during Ajax and AZ Alkmaar’s last 16 cup tie, a home fan evaded security, ran on to the pitch and went for Alkmaar’s South American goalkeeper, Esteban Alvarado.

The 19-year-old supporter managed to swing his leg at Esteban as the goalkeeper defended himself which resulted in the shaven-headed thug collapsing to the ground.

Taking advantage of the failed assault, Esteban literally put the boot in by using the troubled teen for kicking practice.

Before ground security could reach the scene, Esteban landed two solid kicks to the legs and torso of the adolescent deviant.

The incident descended into farce when Esteban was shown a red card by referee Bas Nijhuis, which prompted Alkmaar’s coach Gert Jan Verbeek to order his player’s off the pitch.

However, the red card was rescinded by the Dutch football association yesterday, but a decision has not yet been reached as to whether the match will be replayed or the result awarded to home side Ajax.

The invader was arrested and also given a lifetime ban by Ajax.