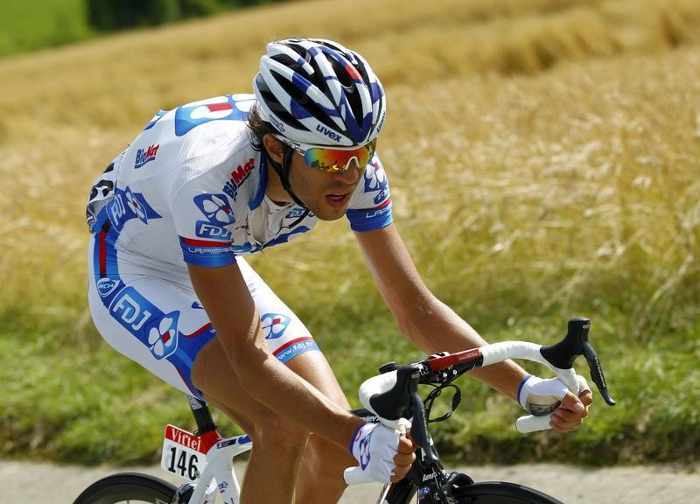 THIBAUT Pinot has played down an all-French rivalry with fellow youngster Romain Bardet by saying his compatriot is not his biggest threat for a rare home podium finish on the Tour de France.

Italy’s Vincenzo Nibali is well on his way to overall victory.

There are three stages in the Pyrenees in the last week of the race, but the podium standings could well be decided with Saturday’s final time trial, a 55-km solo effort against the clock in which Bardet does not excel.

“There has always been a rivalry with Romain,” a relaxed Pinot told a news conference on the second rest day of the Tour on Monday.

Asked who his rivals for a podium finish are, he said: “Today, Valverde, Van Garderen and Peraud. Bardet has only 15 seconds on me…”

Should it stand after the Pyrenees, where Bardet has promised to blow up the race, the AG2R-La Mondiale rider’s 16-second advantage is expected to be easily wiped by Pinot.

“I’m more afraid of the others in the time trial,” he said.

While FDJ.fr rider Pinot, 24, has greatly improved in the effort against the clock, he is still not on the level of Peraud and Van Garderen, or even Valverde.

Valverde is 4 minutes 37 behind Nibali and Pinot is 29 seconds behind the Spaniard. He leads Van Garderen by 43 seconds and veteran Peraud by 1:02.

The 23-year-old Bardet believes he and Pinot could be joining forces although there will be no clear alliance as he shares leader’s responsibilities at AG2R with Peraud.

“If we’re both on a breakaway move, we’ll give everything because we have the same interests,” he said on Monday.

The last Frenchman to finish on the Tour podium in Paris was Richard Virenque in 1997.

No life-time ban for overstays

One man killed, one injured in two fruit-picking accidents on Phuket