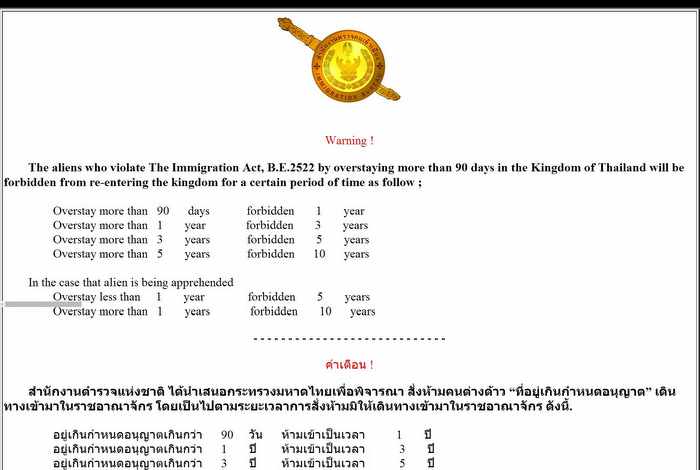 PHUKET: Thailand’s Immigration Bureau has dropped its proposal for a lifetime ban on foreigners re-entering the country if they are caught overstaying their permits-to-stay by 10 years or more.

The Immigration Division 1 in Bangkok announced the news by posting a special notice on its website this morning (click here).

Under the new proposed rules, there is no re-entry ban for foreigners who overstay by less than 90 days.

However, foreigners caught overstaying more than 90 days, but less than one year will face a five-year ban on re-entering the country.

Foreigners caught overstaying more than one year will face a 10-year ban.

The notice posted today follows the Immigration Bureau seeking a lifetime ban for foreigners who remained in Thailand more than 10 years after their permit-to-stay expired.

Lt Gen Thatchai Pitaneelaboot, commander of Immigration Bureau’s Region 6 division, confirmed to the Phuket Gazette earlier this month that the lifetime ban could have come into effect by July 31 (story here).

Pinot plays down Bardet rivalry ahead of Pyrenees