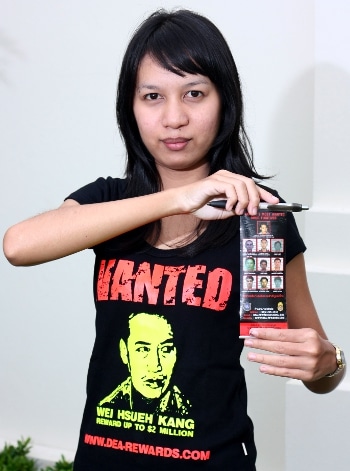 PHUKET: Officers from the US Drug Enforcement Administration (DEA) met with their Thai counterparts in Phuket yesterday to discuss when and where they will hand out souvenir items bearing images of some of the “most wanted” drug traffickers in Asia.

Attending the meeting at Tourist Police headquarters in Phuket Town were DEA Group supervisor David McConell and special agents Scott Seeley-Hacker and Mark Grey, all from the DEA office in Bangkok.

The officers presented items including T-shirts, pens, beverage coasters, matchboxes and even “beer condoms”, all featuring photos and names of some of the DEA’s most wanted criminals in the region.

At the top of the list is Wei Hsueh-kang, an ethnic Chinese drug trafficker and high-ranking official of the United Wa State Army (UWSA), the leading heroin and ya bah (methamphetamine) trafficking organization in Southeast Asia.

He has also been known to use Thai aliases Charnchai Chiwinnitipanya and Prasit Chiwinnitpanya.

The DEA is offering up to US$2 million for information leading to Wei’s capture and successful prosecution. Information is available at: www.dea-rewards.com

Also at the presentation were Drug Suppression Division officers from across Phuket, including Royal Thai Police Narcotics Suppression Bureau officers Sutthirat Tojumba and Narkpong Potha, who head up the provincial drug suppression unit.

The DEA officers explained that the giveaway is aimed at raising awareness of the cash awards on offer and encouraging people to contact authorities if they think they have spotted any of the suspects here in Phuket.

The items will be handed out at four popular locales over a five-day period.

Soi Bangla has been named as one of the areas. The other three have yet to be decided on.

Tourist Police and local authorities will hand out the items to foreigners and Thais alike, the officers said.

The project is expected to launch next month at the Phuket Carnival, which gets underway on December 15, they added.

The “Spot a Druglord” project was initially launched in August in Bangkok, Pattaya, Chiang Mai, Chiang Rai and Udon Thani.

“We have received some information from people in those places, but we have yet to apprehend any of our ‘most wanted’,” said Mr McConnell.