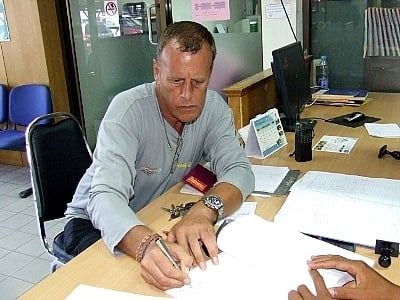 Charles Stuart Crompton and his wife left their home in Soi Natai at 8:30pm on Tuesday night and went out for a meal. When the couple returned home two hours later they found their house had been broken into.

The couple, in their 50s, have lived in Rawai for four years. They belief the thief entered the house through the master bedroom window.

Mr Crompton told the Gazette he believed over half a million baht’s worth of valuables were missing.

The missing items included three rings, a notebook computer and 12,000 baht in cash taken from a locked drawer in the bedroom.

As two of the pieces of jewelry are cherished family heirlooms, Mr Crompton has offered a reward for their safe return.

“We would very much appreciate if anyone does find either of my wife’s rings that they might please return them to her. The pink gold ring was given to her by her mother and the diamond platinum one by her grandmother. They’re very important for her and she is heartbroken that they’ve been stolen,” he said.

The Cromptons are offering a 50,000 baht reward for return of the rings.

Chalong Police are today carrying out an examination of the house.