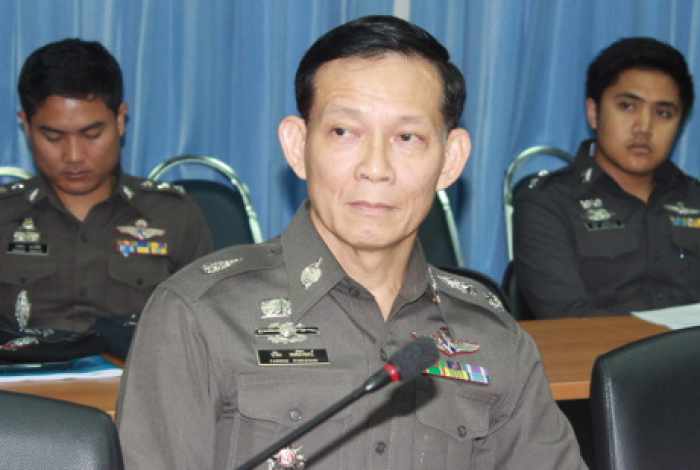 PHUKET: Region 8 Police Deputy Commander Paween Pongsirin today affirmed that his officers’ mandate was to crack down on Phuket’s taxi mafia, not to tackle any corrupt activities allegedly perpetrated by the island’s police officers.

“My specific orders are to crack down on Phuket’s taxi mafia,” Maj Gen Paween said.

“There are about 10 officers in my team who are charged with investigating this case. So far, we have issued arrest warrants for more than 100 people involved in the taxi mafia, including some of Patong’s most powerful men.

“Our part is merely to investigate and arrest those we believe are involved. Once the suspects are in custody, it’s up to the courts to bring them to justice.”

He declined to comment on why Region 8 Police had stepped in to take the reigns of the taxi mafia crackdown.

Gen Paween’s remarks follows those made the day before by Preechavude “Prab” Keesin, who criticized Phuket’s police, and alluded to their involvement in corruption, during a press conference held at the Keesin family home.

“I think that they already know who is involved in the corruption on the island. I’m not going to say who it is, but if they want to take down corrupt people, they know who to go after,” said Mr Prab, who along with his father, former Patong mayor Pian Keesin, and brother Mr Pattawee, faces charges of extortion and criminal activities carried out by a criminal association.

“I cannot comment on the work of police, or whether they are carrying out their duties when it comes to cracking down on corruption – this is not my responsibility. Phuket police have full authority to investigate anyone on the island,” Gen Paween stated.

However, he pointed out that the island’s police force was in a much better position to make an impact on local corruption than his team was.

“There are about 1,000 police officers on the island. We have only 13 officers working here. Local police can therefore do a lot more [to tackle corruption] than we can,” he said.

“If you think you are too small to make a difference, try sleeping with a mosquito.”

Gen Paween also affirmed that there were no conflicts or underlying political motives behind the work of Region 8 Police. He and his team were just doing their job, he said.

“There is no political motive behind this. I am not picking on anyone, and I am not here to make enemies,” Gen Paween assured. “However, if some people see me as the bad guy, there’s nothing I can do. I can’t please everyone – as a policeman I have to accept that.

“I was appointed as a Patong Police superintendent for only seven months in 2000. I knew Mr Pian, but not personally. I only met Mr Prab a few days ago when I started investigating this case. I do not have any conflicts with either of them.”

Gen Paween added that those facing mafia-related charges could say whatever they liked, as he was confident the truth would be revealed by the evidence.

“I do my job one step at a time. The suspects can say whatever they want, because I am sure we have enough evidence against them,” he said.

“Meanwhile, we will continue our investigations and dig deeper into tracking down other mafia suspects. We will not stop until we have got the job done.”