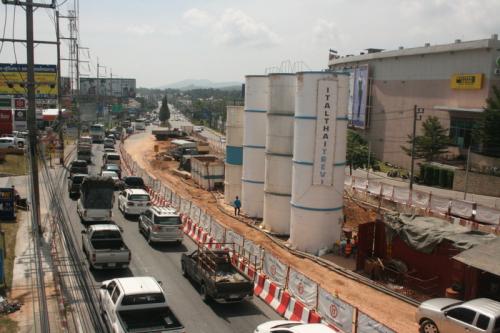 PHUKET: To alleviate the ongoing traffic tailbacks at the construction site of Phuket’s first underpass (story here), the project managers will open all three lanes of the underpass at the beginning of next year.

“So far, the underpass is 11 per cent complete. At the beginning of next year, it will be opened for road users,” Department of Highways’ Bureau of Bridge Construction engineer Itthiwat Kritsanawanich announced at a meeting yesterday.

“After we finish the underpass itself, we will begin the road works at the intersection,” Mr Itthiwat said.

“First, we plan to close the two lanes northbound in front of Central Festival for renovation. At that time, we will open all three lanes of the underpass so northbound traffic can continue uninterrupted,” he told the Phuket Gazette.

Any northbound motorists wanting to turn left or right at the intersection will have to continue all the way through to the Samkong Intersection, in front of the Tesco Lotus supercenter, and make their way from there, he added.

Southbound traffic wanting to turn left or right at the junction will remain unaffected.

“At that time, we will open all three lanes of the underpass so that southbound traffic can continue uninterrupted,” Mr Itthiwat explained.

In the mornings, two lanes southbound and one lane northbound will be open to traffic, Mr Itthiwat said.

In the evenings, the traffic flow will be reversed, with two lanes northbound and one lane southbound open to traffic, he added.

As for Phuket’s second underpass, to be built further north at the Samkong Intersection at a cost of 850 million baht, Mr Itthiwat said that a construction contractor had been chosen, but had yet to sign the government tender.

“I think the budget for the construction of that underpass might even decrease by about 10 million baht because the costs of the construction materials required were high at the time we opened the contract for bidding, but now the prices of the materials have fallen,” he said.