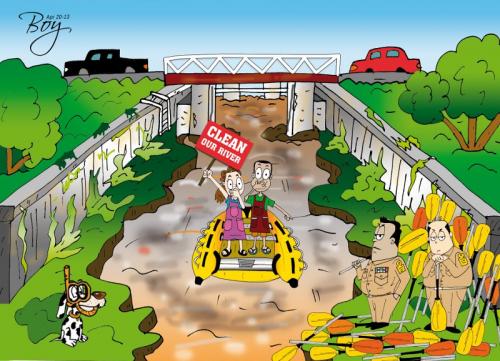 PHUKET: Pollution levels in the Bang Yai Canal strong enough to make residents of Phuket Town’s Samkong area physically ill should spur authorities in all relevant jurisdictions to work together to pinpoint the source of the contaminants and punish any violators.

Unfortunately, the official response on all sides has been the opposite. Some local officials are firing off knee-jerk denials, claiming that the source of the contaminants are not in their areas of control, while others are using this tragedy as an excuse to call for additional funding for expensive new water treatment plants.

Reports of unacceptably high pollution levels in Klong Bang Yai in Phuket Town are certainly nothing new. In August 2011, residents in the area where the canal passes Satree Phuket School were seen collecting hundreds of dead fish killed in a mysterious “mass poisoning”. The cause was never thoroughly investigated, let alone explained, by authorities.

Even in Kata, once considered one of the island’s untainted tourism jewels, poorly regulated development and the recent lack of rainfall have turned the canal near the south end of the beach into little more than a fetid open sewer. Similar manifestations of the local population’s collective contempt for the environment that sustains us can be found all over the island, and even on the remains of broken coral reefs off our shores.

Of course the case of Klong Bang Yai long predates Phuket’s emergence as one of Asia’s premier resort island destinations. The canal and its many tributaries were vital components of the vast tin mining industry that radically transformed the natural topography into what we see today. In fact, most of the island’s water supply is collected in abandoned tin-mining ponds, while the entire shoreline along Phuket Bay, including all of Saphan Hin, was created by tin mine tailings that have left the bay’s once sandy bottom now covered in several meters of muck.

Klong Bang Yai drains much of Rassada, Phuket Town and virtually all of Kathu into the sea at Saphan Hin, which is also home to the landfill and incineration plant that is the final destination of all the island’s solid waste. Rather than use this latest tragedy to seek funding, it is time each and every local administration body in the Bang Yai catchment area take responsibility for enforcing pollution control laws and punishing violators under their jurisdictions, rather than continuing to view the waterway as an open sewer.

Sadly, in many cases this responsibility falls to the same individuals who rubber stamp Environmental Impact Assessment (EIA) studies in exchange for payoffs, and who are probably hoping now that the monsoon rains will arrive in full, diluting the end result of their ineptitude and greed, carrying all the waste out to sea as public attention turns to more immediate issues such as flooding and landslides.