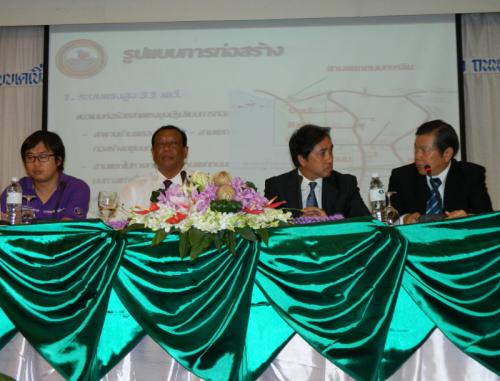 PHUKET: A plan to beautify over 3.5 kilometers of the Patong beachfront road by hiding unsightly power lines underground was presented at a public hearing yesterday in Patong.

If the 203-million-baht project passes the public hearing process, as it is expected to, construction could start this year, covering the stretch of Taweewong Road from the three-junction in Kalim to Klong Pak Bang bridge, a total of 3.65km.

“But first we need to present the idea to the public and allow them to comment,” he said.

“The traffic problem is the only thing that I’m really concerned about. Other than that, I just think the construction should be fast and have a clear time line,” Weerawit Kurasombat, President of the Patong Entertainment Association said.

“Overall, I support this project because it will make the beachfront road more beautiful,” he added.

Once the plan passes the public hearing process, budget documents will be presented to the governor and construction bids will be solicited.

The planners hope to use money from the 2014 budget, which takes effect in October, to start construction this year.