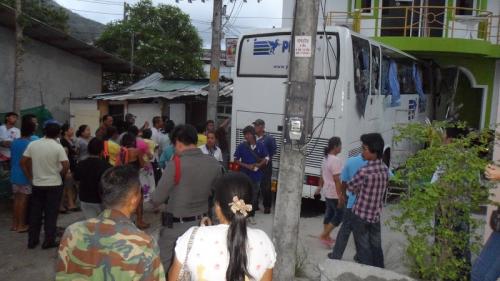 PHUKET: Five Russian tourists were injured when the brakes failed on a Pegas Touristik bus while the vehicle was descending the steep hill into Phuket’s premier resort town of Patong at about 6pm this evening.

The Bangkok-registered bus came to a thudding halt as it slammed into a house by the side of the road near Suwankiriwong Temple, known locally as Wat Patong.

“When I arrived the scene, there were five Russian tourists injured: three men and two women. They were transferred to Patong Hospital for treatment of minor injuries,” Patong Police Lt Col Jongserm Preecha told the Phuket Gazette.

“Thankfully there were no deaths in the accident,” he added.

The bus slammed into the home of Patong resident Thitiporn Kingko, 35, who escaped injury in the spectacular accident.

Inspecting the damage to her home and grateful no one in her home was harmed by the impact, Mrs Thitiporn said, “This is the second time a vehicle has crashed into my house.”