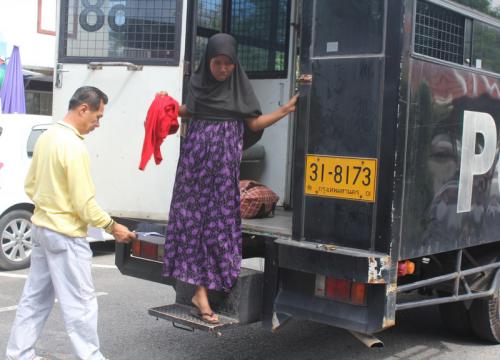 PHUKET: Officers at the Phuket Shelter for Children and Families on Koh Sireh this afternoon called an emergency meeting to discuss reports of Rohingya refugees disappearing from the center early yesterday morning.

The meeting was called when news reports surfaced that Muslim women and children were noticed missing from the shelter at about 2:30am.

The mass disappearance followed two other incidents since January of Rohingya refugees fleeing the shelter, never to return.

Some of the “escapees” were taken back into custody near a mosque in Phuket Town, said one report.

However, Phuket City Police Superintendent Sermphan Sirikong told the Phuket Gazette today that he had not received any reports of Rohingya being arrested in Phuket Town in the past few days.

“We were notified of the missing women and children, but I have yet to receive confirmation that any of them have been taken back into custody,” he said.

Jiranun Jeamcharoen, director of the welfare center on Koh Sireh, declined to confirm or deny the report, saying in a brief conversation with the Gazette that she was on her way into the meeting,

“We cannot give any comments to the public right now. We are now in the meeting. More information will be revealed as soon as possible,” said Ms Jiranun.

Reports of refugees fleeing the shelter came after ITN Channel 4 News in the UK broadcast a report (story here) highlighting the cramped conditions many Rohingya are facing in detention at the Phang Nga Immigration Office.

The program showed more than 270 Rohingya men being held in two wire-bound holding cells, each designed to hold only 15 men.

Many of the men in the cells barely had enough room to sit. Some had swollen feet and withered leg muscles due to lack of exercise. Some of the men said that they have not been let out of the cells in months.

“We have 38 Rohingya refugees detained here, but the facility has no more room,” said Col Sunchai.

“We have already transferred 25 to the Immigration Police shelter in Ranong and 20 children were handed over to the Phuket Shelter for Children and Family [on Koh Sireh],” he explained.

“Right now, the shelters in other provinces have no more room for refugees. The shelter in Phang Nga has almost 300 Rohingya already,” Col Sunchai added.

Col Sunchai said his concern stemmed from the ongoing influx of Rohingya from Myanmar.

“I have no idea what we are going to do if they keep coming,” he said.

“Our superiors have reported the problem to the Cabinet. They told us they were going to talk to the United Nations and ask a third country to take them,” Col Sunchai explained.

“But it seems to be very difficult. No neighboring countries want to take them. In the end, they might end up staying in Thailand,” he added.

Immigration Bureau Commissioner Pharnu Kerdlarpphon was in Phuket last month for a closed-door meeting of high-ranking officials, after which he expressed his concern for the growing number of Rohingya refugees being detained in Thailand (story here).

“The shelters are supposed to be for temporary detention before illegal immigrants are deported, but in the case of the Rohingya, we cannot really deport them because their home country [Myanmar] does not welcome them,” he said.

Gen Pharnu confirmed that as of May 5, Thai Immigration had 1,936 Rohingya in custody across the country, including 399 boys and 304 girls.

“Now the Thai Government is in discussions with other countries to find a place the refugees can be transferred to.

“I have been assured that the Rohingya will be treated in a way that meets international-standards,” he said.

Governor looks for direct flights between Phuket and Nice, France