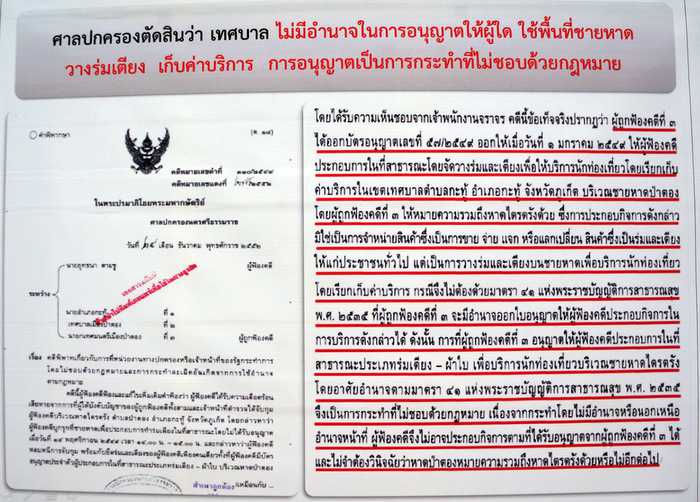 PHUKET: Police have turned their eye away from Phuket’s taxi mafia to the island’s billion-baht illegal beach rental scheme – starting with the role played by Kata-Karon Mayor Tawee Thongcham.

Karon Beach is 2.9 kilometers long. With four rows of beach chairs, it would be possible to generate 3.8mn baht a day, which is 1.38bn baht a year, it was explained at the conference.

The slightly shorter Kata Beach would be able to generate profits of 1.38bn baht a year.

“This has been going on for decades. However, the sands belong to everyone. Nobody can own them, or rent them out,” Gen Paween said.

“The beach vendors claim that they received permission from the mayor to operate their business on the sand. A court order in 2009 sentenced Yutthana Thamroo for encroaching on the beach, and made it clear that the local government did not have the right to charge anyone to use the beach.”

Mr Yutthana was handed down a sentence of six months imprisonment and a 4,000-baht fine. However, he pleaded guilty to the charges, so the jail time and the fine were halved – and the jail term was reduced to a suspended sentence. He was also put on a one-year probation.

Also on display today were two cheques made out to Visut Chankham: one for just over 2.9mn baht and the other for 3mn baht exact. The payment order named the service provided as “Beach Rental” for November 1, 2010 to October 31, 2015.

One example of a contract between the lessor Ratchaporn Loysamutr, 41, and a lessee named by police as “xxxxxxx Phuket Beach Resort” agreed to some of the following terms:

“Lessor agrees to allow Lessee to lease the right to operate Beach Umbrellas / Sunloungers on the Karon Noi Beach in front of the hotel. Lessor has obtained the right of 1 of 2 operators on Karon Noi Beach of this lease contract is to allow Lessee to provide service to hotel guests. This contract is for 1 year and is effective from 15 August, 2005 to 14 August, 2006 and Lessee agrees to pay Lessor 500,000 THB (five hundred thousand Baht) for the agreed period.

“Lessee cannot sublease to a third party, unless there is a written approval by Lessor.

“The Lessee will use the same number of Umbrellas / Sunloungers from both Lessors operating on the beach.

“Lessor retains the right to sell drinks on the beach, as before Lessor will provide the facilities herself according to regulation and approval by Karon Municipality.”

The 15 suspects called in to the police station have yet to be charged, confirmed Maj Gen Paween.

“As you can see this is not small local businesses run by people who are struggling financially, this is big money,” Maj Gen Paween said.

“We will track down those who have been illegally profiting from the beaches and they will face justice.”

Though the investigation has started in Kata-Karon, it will sweep up along the entire west coast, the major-general confirmed

“Right now, we are taking it step by step. We started in Karon, and will move to Patong next. There are a lot more people involved – and we will get them.”