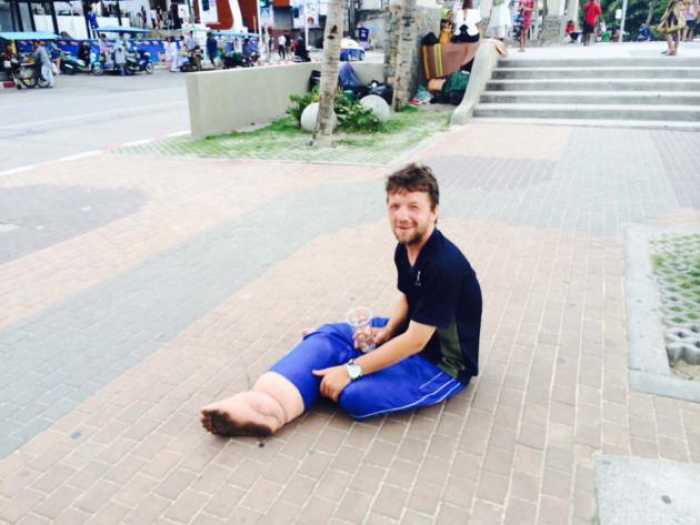 PHUKET: After attracting sympathy and donations from Thais in Bangkok, a German with an excessively swollen leg was seen enjoying drinks and the nightlife in Pattaya on Wednesday night. Tourist police have detained Benjamin Holse, 29.

Lt-Colonel Arun Promphan of the Tourist Police Division said yesterday the German Embassy would be informed of the latest development and Holse would be deported.

Holse sneaked away from a Bangkok hotel that a German foundation had arranged for him to stay in while waiting for the issuance of a passport earlier this week. The German initially claimed his passport was stolen.

Taxi motorcyclists in South Pattaya said yesterday they recognised Holse from his pictures in the news when he showed up on Tuesday night.

Holse was described on social media as a poor man whose money and passport had stolen in Thailand and who ended up begging for money on Bangkok streets.

Chumphol Thiangtham, chairman of Deutscher Hilfsverein Thailand eV, said on Sunday the German organisation had approached Holse and offered him help before his case went viral on the Internet, but he turned it down.

Tourist police, after learning about Holse, then contacted Chumphol and asked him to help the German, he said.

He claimed Holse did not like the girl they brought for him and decided to check out Pattaya Walking Street himself.

During his trip to Pattaya, many pictures of Holse were taken and uploaded onto social media.

Once again pictures of him created a stir, but there was no sympathy this time.

Thais are angry because it seems he preyed on their generosity.

A hotel employee in Pattaya claimed a drunk Holse called Thais stupid for giving him money.

Tourist police who accompanied Holse to a hotel in Pattaya on Wednesday night said the German had just Bt7,000 left.

According to the tourist police, Holse claimed he came to Pattaya to meet a friend but his friend did not show up.