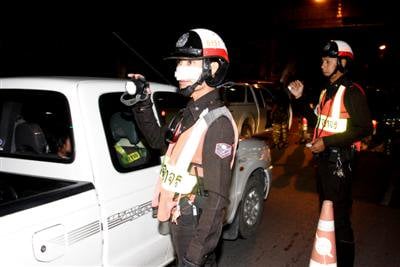 PHUKET CITY: Phuket Police are gearing up for the annual ‘Seven Days of Danger’ road safety period that will this year run from December 29 to January 4.

Nine main police checkpoints on major roads and 18 more on local roads will be manned around the clock to ensure public safety, according to the Department of Disaster Prevention and Mitigation Phuket (DDPM-Phuket).

The safety campaign will emphasize suppression of drunk driving in an effort to prevent road accidents. Coffee and water will also be available for motorists who arrive at checkpoints tired or in need of refreshment.

In Muang District, the three main checkpoints will be on Thepkrasattri Rd in Phuket City, on Wichit Songkraam Rd in front of Surakul Stadium, and on Chao Fah West Rd in front of the Chao Fa Thani housing estate.

In Thalang, the three main checkpoints will be at the Tha Reua Intersection (Heroines Monument), a point near the Cherng Talay Police Station, and at the Tah Chat Chai checkpoint in Mai Khao.

In Kathu, the checkpoints will be operating at the Si Kor Intersection in Tung Tong, on the road near Phuket FantaSea in Kamala, and on the Patong side of Patong Hill Road.

Checkpoint locations are subject to change and the location of smaller checkpoints on minor roads has not been disclosed.

In addition to screening for drunk driving, motorists passing though the checkpoints will be checked to see if they have fastened their seat belts and are carrying valid licenses. The police will also be looking for drivers using cell phones or otherwise breaking the law.

People on motorbikes will be stopped for helmet violations and their drivers will be asked to show a valid license.

Those caught driving without a license, driving a car without a seatbelt or operating motorbikes without a helmet face fines of up to 1,000 baht.

Those convicted of drunk driving face fines ranging from 5,000 to 20,000 baht, jail terms of up to one year, or suspension of driving privileges for a period to be decided by the court.

Fines can increase to as much as 100,000 baht in cases causing injury to another party.

Harsher punishments for drunk driving will take effect when the new Drunk Driving Control Act, introduced by the Road Safety Group of Thailand and the National Health Foundation, is promulgated. However, that will not occur in time for the New Year’s holiday.

Pol Sgt Maj Rachane Chookaew of the Thung Thong Police said that most checkpoint inspections will start with license checks.

Foreign tourists driving cars or motorbikes are technically required to be licensed in Thailand, but police often let them go if a valid international license is presented, he said.

However, enforcement of this law can vary in different police districts. The Gazette has recently received numerous reports of crackdowns on unlicensed foreign motorcyclists in Patong.

To avoid problems, Sgt Maj Rachane encourages expats to apply for licenses at the Land Transport Office in Saphan Hin, where written tests in English are available.

On a positive note, Thailand’s Road Safety Center reported that the total number of deaths in Phuket from road accidents fell from 130 in 2007 to 100 in 2008.

During the ‘Seven Days of Danger’ campaign ending on January 4 this year, one man and one woman were killed and 90 people were injured, many seriously, in road accidents on the island.