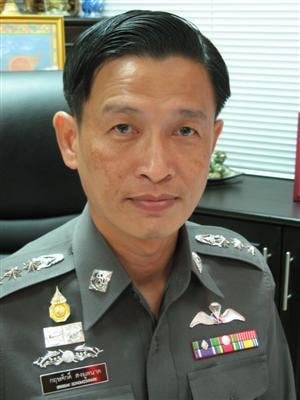 PATONG, PHUKET: Kathu Police are calling on the help of local residents to help in the never-ending war against crime in Patong.

“We have set security measures for Patong, not only for high season but year-round. These include providing local residents with the same type of training our officers get in identifying criminal behavior. When they notice suspicious behavior or criminal behavior, they will notify police immediately. This is a practical approach, as criminals tend to steer clear of officers in uniform,” he said.

Col Grissak said two police checkpoints have already been set up at key entry points to prevent guns and other contraband from entering Patong. One is on Sirirat Rd, which connects Patong with Karon. The other is on the Patong-Kamala Rd.

A third checkpoint is overseen by the Tung Tong Police in front of their headquarters on Phra Barami Rd in Kathu, on the Kathu side of Patong Hill.

“Police manning these checkpoints will be on the lookout for weapons, suspicious behavior and people with outstanding arrest warrants,” he said.

Col Grissak said involving the community in the war against crime is vital given the number of officers available.

“The number of officers is determined by the Office of the Civil Service Commission, so we need to manage our resources as efficiently as possible and train people to be on the lookout for suspicious behavior – and to report incidents as quickly as possible,” he said.

Patong currently has a registered population of just over 18,000, but it is unknown how many migrant workers from other parts of the country, alien workers and expat residents actually reside there – let alone the number or tourists that happen to be there at any given time.

The scale of the disparity is indicated by the number of hotel rooms. In 2008, Patong had 13,035 hotel rooms in 231 accommodation establishments registered with the Tourism Authority of Thailand.

In charge or maintaining order are the Kathu Police, with about 260 officers.