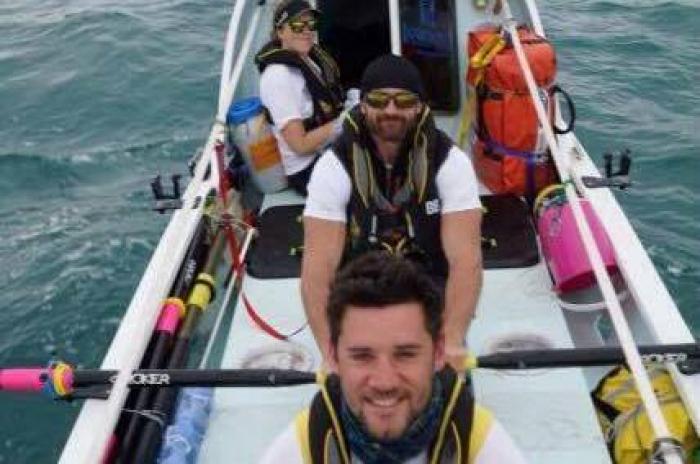 PHUKET: The Row2Rio challenge was almost cut short earlier this week when the boat’s auto tiller went on the fritz as a 180-meter cargo ship barrelled toward the four-person crew rowing across the Atlantic.

“Our AIS alarm (close proximity to other vessels) went off and in the distance the ship’s spotlight came on. They were sweeping the water looking for us as their alarm system would have sounded as well,” wrote Luke Richmond, Aussie expat and head coach at Unit27. “A quick chat via the radio with the ship and a system reset on the auto tiller and all was fine. There are so many big ships out here that you really have to be on your guard at all times, especially in an eight-meter rowboat.”

With full backing from the Ocean Rowing Society and support from ocean rowing experts, the team are on a 6,000 kilometer journey from Portugal to Brazil (story here).

Just days after dodging the enormous cargo ship, the team faced some of the roughest seas yet.

“My midnight shift was something of a surreal experience,” Mr Richmond writes. “If you can imagine pitch black seas, the only things in your vision are your oars and the back of the person in front of you. It’s overcast, no stars and it’s raining. The wind is howling and the boat is getting launched left, right, up and down at total random moments. It’s like being on a roller coaster in total darkness not knowing what bend is coming next.

“It’s a huge toll on the body to stay alert during these hours. Then every few minutes an oar would jump out of my hand and slam into my shins, knee or hip as if just to say, ‘stay awake mate this isn’t over yet’.”

After departing from Portugal on February 29, the team has covered more than 1,500 kilometers as they currently pull their way between Santa Cruz de Tenerife and Las Palmas de Gran Canarie, which are part of the Canary Islands off Western Sahara.

Though the challenge is set to pay tribute to the Olympics, it is also raising funds for Macmillan Cancer Support.

“We fully support their ethos that no one should face cancer alone, currently one in four people are isolated facing cancer. Our target is 200,000 pounds of which 75,000 pounds will be to fund the boat (which we’ll sell at the end and donate the proceeds to Macmillan) and 125,000 pounds for the charity, which is enough to fund two Macmillan nurses for two years,” explains the Row2Rio website.

Support their efforts to raise money for Macmillan Cancer Support by clicking here.