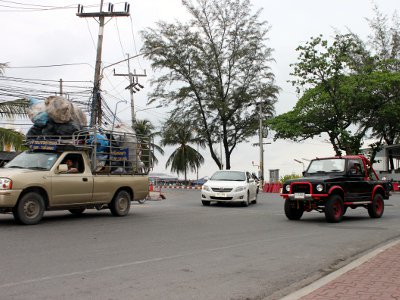 PHUKET: A long-awaited plan to reverse the direction of one-way traffic flow in Patong should go into effect in June, as soon public hearings and work to complete a new roundabout at the north end of the beach road is completed, local officials say.

Phunsak Naksena, Patong Municipality Chief Administrative Officer, or “Palad”, said the public-hearing process to approve the project was nearing its conclusion, with initial indications revealing that most residents are in favor of the new scheme.

Patong Municipality policy and planning officer Pimpha Sukluang said that data gathered through the public hearing process was “still under computer analysis”. Final results should be available around the middle of April.

“Right now we can say that approximately 70 per cent of the public canvassed agrees with the project,” she said.

Under the current regimen that went into effect in mid-January 2007, southbound traffic is routed along Rat-U-Thit 200 Pi Road, while northbound traffic travels along the Thaweewong Road, better known to many as “the beach road”.

Completing the loop, Prachanukhro Road at the south end of the beach was made one-way toward the beach, while Phra Barami Road remained two-way.

The system, put in place for a three-month trial period, created a great deal of initial confusion. About two weeks after its inception, some 100 tuk-tuk drivers protested at Kathu Police Station that it was forcing them to drive further to get fares to their destinations.

Despite this, it was not until former Patong Police Superintendent Arayapan Pukbuakao – who was transferred to Surat Thani just this week following a promotion – took up his post in March 2010 that the issue re-emerged.

Col Arayapan pledged to end Patong’s infamous one-way traffic system, “which not only confuses people, but is also in violation of current Thai traffic law”.

The violation he referred to is the fact that on some roads connecting the two major arteries, drivers are required to “keep right” in order to make the system work.

Reversing the flow to make Rat-U-Thit 200 Pi Road northbound and Thaweewong Road southbound would do away with this problem, which is the main reason behind the change.

With public approval reportedly imminent, the only remaining obstacle will the the construction of a new traffic circle at the Laem Petch Intersection, the three-way junction on the beach at the south end of the road to Kamala.

Palad Phunsak said the Tripong Company, a contracting firm from Ratchaburi province, has already been contracted to do the project at a cost of 4.2 million baht.

“The contractor for the new roundabout project is ready to start work, but has to wait for existing power poles to be moved. The Phuket Provincial Electricity Authority office in Patong has already been contacted and asked to move the poles,” he said.

A Patong Public Works officer told the Phuket Gazette that the new circle will greatly improve traffic flow and safety in the area, which has been the site of numerous accidents since the current one-way system went into effect. It would also let large vehicles such as 18-wheeled tractor trailers negotiate turns there.

“Some sections of the roads that connect with the new circle will be changed. Phra Baramee Road, will be a two-way, four-lane carriageway. The Kamala-Kalim Road will be three lanes, one lane heading northbound off the circle and the other two lanes carrying southbound and eastbound traffic into it,” he explained.

Another public works officer told the Gazette that painted arrows would indicate the direction of flow to all approaching motorists. These would remain covered until the new one-way system goes into effect.

There are as yet no permanent plans for the middle of the traffic circle.

“The middle of the circle will have features such as trees and sculptures, however nothing permanent. We would like to wait and see whether traffic flows optimally there or not. If not, then we could still easily make the needed adjustments,” he said.

The Gazette asked several local taxi drivers their opinions about the reversal of flow.

Tuk-tuk driver Rachen Kawiket who collects fares at a prime location on Thaweewong Road near the Bangla Road junction, was unaware of the planned change in the one-way system until the Gazette asked him for his opinion about it.

The 24-year-old said he was unaware of any public hearings held to discuss the issue and that he was opposed to any change to the existing system, which he said “worked fine”.

A fellow 40-year-old tuk-tuk driver on Thaweewong Road said that he also did not join in any public hearings.

“Actually, I want them to change the one-way streets connecting Thaweewong and Rat-U-Thit 200 Pi Road to be two-way, like at Bangla and Sawatdirak Roads, because to get back to our queue we have to travel back around quite a long way after we drop off passengers,” he said.

Another small group of taxi drivers nearby had no comments on the change, but went on to say that whatever Patong Municipality did would unlikely be of benefit to them.

Two dead in Phuket as pickup slams into house