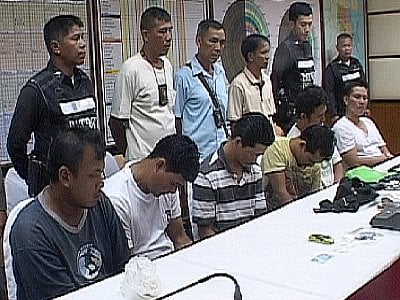 PHUKET: Phuket Police on Saturday announced the arrest of six drug suspects, two of them in possession of firearms.

The first suspect named was Pramin Narksuwan, 31, from Nakhon SriThammarat. He was found in possession 0.91 grams of ya ice (crystal methamphetamine) as well as a 9mm handgun and 12 bullets.

“Mr Pramin was charged with possession of drugs with intent to sell and carrying a firearm with ammunition,” Said Col Chote.

“The second suspect is Saman “Eak” Inruang, 31 years old, from Petchburi. He was found in possession of 0.57g of ya ice and a .357 handgun with four bullets. He also has been charged with possession of drugs and carrying a firearm with ammunition,” Col Chote said.

Both were charged with possession of the drugs, said Col Chote.

The fifth suspect, Sampan Choopol, 43, from Tai Muang in Phang Nga, was also found in possession of 2.28g of ya ice.

“He has been charged with possession of drugs with intent to sell,” Col Chote said.

Police found Mr Sarut in possession of 1,158 ya bah (methamphetamine) pills and more than 30 grams of ya ice.

“He has been charged with possession of drugs with intent to sell, and we seized his laptop and Blackberry telephone as evidence,” Col Chote said.