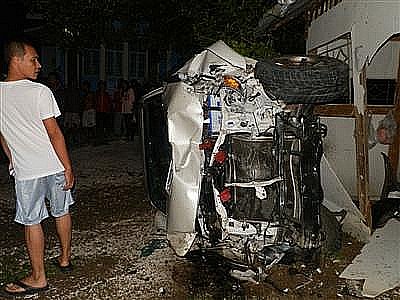 PHUKET: A pickup truck travelling at high speed collided with a motorbike on the main road through Pa Khlok yesterday evening, killing the rider and passenger, and slamming into a house set back from the road at about 7:30pm.

Emergency rescue first-responders from the Kusoldharm Foundation arrived at the accident scene, in front of the Pak Cheet Mosque about five kilometers west of the Heroines’ Monument, to find a mob of angry villagers attacking the pickup driver, 32-year-old Nontee Sangnuang, a resident of Rassada, north of Phuket Town.

The Phuket-registered Toyota Vigo pickup was heavily damaged and lying on its side beside the house.

Mr Nontee escaped from his vehicle and managed to clamber inside the back of one of the Kusoldharm rescue pickups to avoid further beating by the mob.

The angry villagers then attacked the rescue vehicle, causing minor damage to it. They pulled Mr Nontee out of it and started to kick and punch him.

Still angry, the mob turned their frustration on the Kusoldharm officers, asking them why they didn’t help the two people on the ground.

“We tried to explain to them that both [Mr Pairot and Ms Lamyong] were dead when we arrived at the scene, but some of the villagers didn’t seem to understand,” one of the rescue officers explained to the Gazette.

Mr Nontee was taken to Thalang Police Station for questioning and to be tested for alcohol, before being sent to Thalang Hospital for treatment of minor injuries sustained in the beating.

The villagers blocked the road in protest, which ended about 30 minutes later, with police clearing the way to allow traffic through.

Mr Nonee tested positive for alcohol, delivering a blood-alcohol reading of 177mg (a BAC reading of 0.17).

He is now being held at Thalang Police Station.