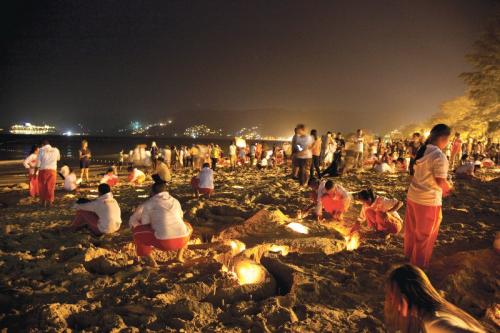 PHUKET: The Phuket community today will honor those who died in the devastating tsunami that struck the island eight years ago, with a ceremony at the Tsunami Memorial Wall in Mai Khao followed by the traditional “Light Up Phuket” candle-lighting ceremony on Patong Beach.

Thai official figures state that the tsunami killed 5,398 people and that more than 3,700 disappeared in the waves that struck Phuket in 2004.

In Phuket, hundreds of tourists, expats, local residents and migrant workers died or disappeared, while in Phang Nga province, north of Phuket, the death toll numbered in the thousands.

The ceremony at the Tsunami Memorial Wall began at around 8:30am.

“The service will include Buddhist monks conducting a mass prayer, a Muslim service and a Christian service,” explained Bussarakorn Saeurng, of the Mai Khao Tambon Administration Organization.

“After the religious ceremonies, attendees will approach the wall to lay wreaths in memory of those who died,” she added.

Over the years, the number of people attending the morning event has fallen. “Last year only about 50 people turned up at the memorial wall to remember those lost to the waves in 2004,” Ms Bussarakorn said.

At 6:30pm, the annual “Light Up Phuket” candle-lighting ceremony will be held on Patong Beach, where thousands of people turn out each year to dig holes in the sand and place lit candles within to remember tsunami victims.

Before attendees are invited to place their lit candles in the sand, the island’s leading officials will hold a ceremony and deliver a few key speeches, offering words to remember tsunami victims by, explained Manop Leelasuthanon, Chief Administrative Officer of the Phuket Provincial Administration Organization.

As part of the proceedings, students from Phuket Rajabhat University will stage appropriate live performances, he said.

“After the formal ceremonies are complete, people will be invited to place their candles in the sand along the beach,” Mr Manop added.