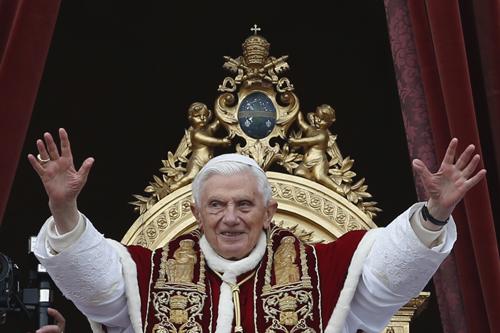 
Pope gives advice as Italians prepare for bitter campaign
Reuters / Phuket Gazette
PHUKET: Pope Benedict sent a political Christmas greeting to Italians as they head into an election campaign expected to be brutal and bitter: think, cooperate for the common good and don’t discard values when making big choices.

The pope, in his Christmas greetings in 65 languages, said in his special message to Italians that he hoped the spirit of the day would “make people reflect, favour the spirit of cooperation for the common good and lead to a reflection on the hierarchy of values when making the most important of choices.”

Italy holds national elections on Feb 24-25 to choose a new parliament and a new government.

Given that Italy’s Catholic Church has turned its back on former Prime Minister Silvio Berlusconi – who is trying to make a comeback even though his previous terms were mired in sex scandals and judicial woes – Benedict’s words could be far less general and casual than they appear at first glance.

“It’s not a specific endorsement for [Prime Minister Mario] Monti but it comes pretty close, given the well-known esteem the outgoing prime minister enjoys [at the Vatican],” the Italian news agency Ansa said of the pope’s words.

Monti has urged Italians to join a debate on their country’s future. He declared his availability to lead a reform-minded centrist alliance to seek a second term to complete the economic reform programme begun when he took office just over a year ago.

He may yet stay on the sidelines, outside elected office, but still exercising substantial influence over a new centrist grouping that could at the very least help shape the agenda of the next government.

The Church has been embarrassed by the scandals surrounding Berlusconi but at the same time fears the unknown of what a leftist government might do on issues such as gay marriage and euthanasia.

Sober and steady
The former EU Commissioner – once labelled Supermario for his effectiveness in the job – goes to mass every Sunday with his wife of 40 years and has impressed the Vatican with his calmness, sobriety and what the Church sees as a genuine desire to fix Italy’s economic problems and avoid social unrest of the kind seen in Greece.

Significantly, one of the ministers in Monti’s outgoing technocrat government is Andrea Riccardi, founder of the internationally prestigious Catholic peace and charity group, the Sant Egidio Community.

Riccardi is very influential among Catholics in Italy and could help deliver the Catholic vote for Monti or anyone else who promises to continue his policy of economic reform.

Italy’s Catholic Church used to support Silvio Berlusconi as a bulwark against leftist governments. But it has made it clear to Berlusconi that this time there will be no blessing.

In its reaction to Berlusconi’s decision to return to politics, Famiglia Cristiana, an influential Catholic magazine with one of Italy’s largest weekly circulations, likened him to a “dinosaur” who could throw “the whole country into chaos”.

The magazine accused him of selling Italians a mirage and trying to lure them with populist promises, such as the abolition of property taxes on primary residences.

Monti, demonstrating the kind of sobriety the Church says Italy needs, has said no one loves taxes but if the property levy is abolished for opportunistic electoral reasons, the move would throw accounts so out of whack that future governments would have to re-introduce it at a higher rate.

Berlusconi’s adversaries accuse him of wanting to return to front-line politics to protect his business interests and regain partial and temporary immunity in trials for corruption and paying for sex with a minor.

Cardinal Angelo Bagnasco, head of the Italian Bishops Conference, has made it clear where he stands on the issue.

“I am shocked by the irresponsibility of people who want to look after their own affairs while the house is still on fire,” Bagnasco said.