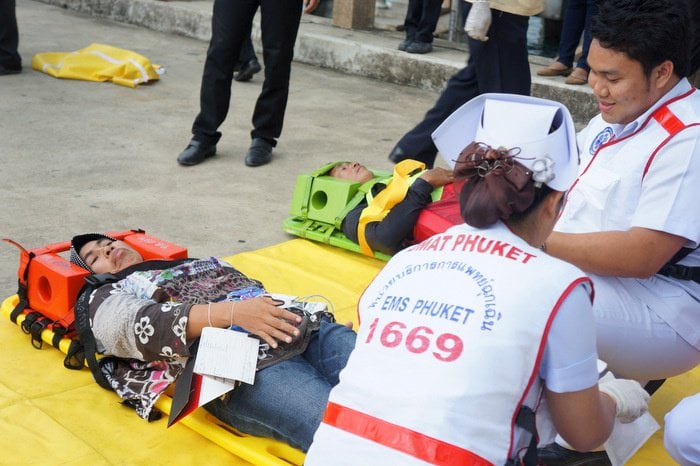 PHUKET: A full-scale tsunami evacuation and emergency-response drill will be held on Koh Sireh, on the east side of Phuket Town, on May 7.

The full-scale annual drill was originally slated to be held on Christmas Day last year (story here), but was later postponed due to sensitivities over the exercise being held one day before the 10-year anniversary of the disaster of 2004 (story here).

The move to hold the drill this year on the lightly populated isle of Sireh was to ensure that locals there were familiar with evacuation procedures in case another tsunami strikes Phuket.

“We have had many drills along the west coast already, but the people on Koh Sireh have not had a full-scale tsunami drill before,” Santhawat Riwleung, chief of the Phuket office of the Department of Disaster Prevention and Mitigation (DDPM), announced at a meeting yesterday.

“Many residents live there, including fishermen, local people and tourists, and they should all know how to evacuate the area.”

About 150 locals will take part in the drill, he added.

On May 6, officers will hold a briefing session at Baan Koh Sireh school to prepare agencies and local residents taking part in the drill.

“We will make sure each office knows their areas of responsibility and how to contact others,” Mr Santhawat explained.

“Officers and local residents will have the chance to practice their rescue and evacuation skills, and the tsunami warning devices will be tested as well.”

The exercise will simulate the National Disaster Warning Center (NDWC) in Bangkok issuing a warning that a tsunami will strike Phuket, and ordering local emergency first-responders to immediately evacuate people in risk areas.

The announcement will be simulated as if it were broadcast on TV and radio, and people alerted by SMS.

Tsunami warning towers at Koh Sireh will then sound the alarm.

“Speaker trucks will also be deployed to make sure locals are informed about the warning.”

The drill will also simulate several accidents, including a motorbike crash with a trailer, a pregnant woman and several children suffering injuries while fleeing evacuation zones and a search and rescue team deployed to recover five people reported missing in the evacuation.

A public awareness campaign will be launched next week to inform local residents and tourists of the upcoming disaster simulation, Mr Santhawat said.

“Information about this will be spread one week before the drill to avoid panic among the public,” he noted.

Public awareness campaigns of tsunami-drills in Phuket were ramped up in 2012, when two tourists on holiday from Vietnam panicked after witnessing a full-scale tsunami rescue drill being conducted at Ao Por.

The tourists believed that the disaster unfolding before their eyes was genuine (story here).

“We have to keep practicing our annual drill. Everyone benefits from the training,” Mr Santhawat said.

“Officers improve their communication and emergency-response skills, and local people and tourists learn what to do if we were struck by such a disaster again.”