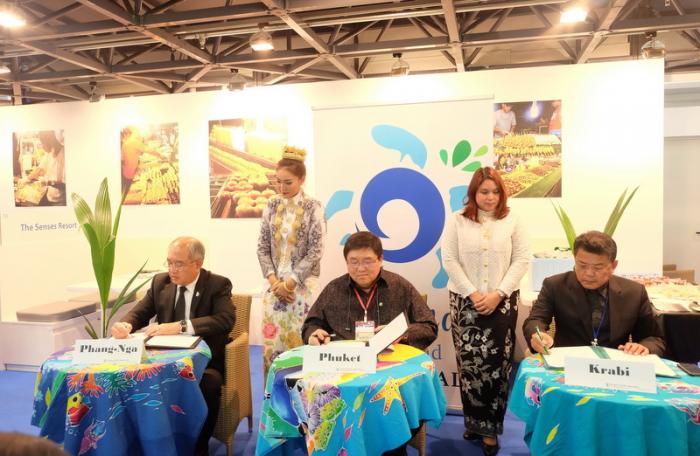 PHUKET: At least 28 hotel and tourism operators from the Andaman region participated in the ‘International Tourism Bourse (ITB) 2017’ event held from March 1-12 in Berlin, Germany.

Her Royal Highness Princess Ubolratana also visited the Phuket booth at the event.

ITB is the foremost business platform for global touristic offers. Since its founding in 1966, ITB Berlin has established itself as the guidance system of the global travel industry.

The team displayed tourism related products and services from all parts of Thailand. They also emphasized tourism-related facilities, such as airports and hospitals.

Phuket, Krabi and Phang Nga also signed a Memorandum of Understanding (MoU) titled ‘Andaman One for All’ to broaden their appeal to the European market.

“The special thing about this year is the MOU. Phuket is the top market for European tourists already, and I think this cooperation will generate an even greater response from tourists,” said PTA President Sathirapong.

“They will know that they have more choices and destinations to travel to. They will enjoy full-option tourism, including beaches, nature, culture, food and the like. This will increase their length of stay, leading to more money flowing into the Andaman area,” he added.

TAT Phuket estimates that Russians and Germans are among the top five visitors to Phuket.

“Our strategy is to focus on the ‘luxury groups’, such as married couples, as well as marina and sport enthusiasts. I think they spend a considerable amount during their visit,” said Anoma Wongyai, director of TAT Phuket.

“If there are no unexpected incidents, the European market will continue to be a priority for us, especially since their economy is improving,” she added.

European operators, in turn, suggested areas for improvement to Phuket officials. One of the major concerns for their tourists, they said, is a viable public transport system, as opposed to expensive taxis and tuk-tuks.

On the other hand, they appreciated that the government had allowed beach chairs in 10 per cent zones, which they feel is a critical need of European tourists.