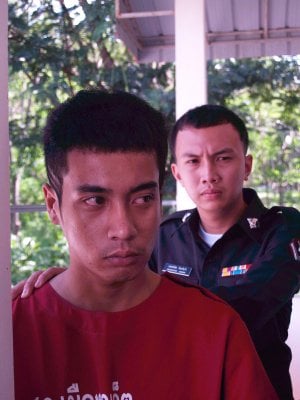 PHUKET: A young man arrested in Phuket for the murder of Pirasak Pongchoo has confessed to slashing the man’s throat after enduring a month of sexual abuse.

The badly decomposing body of the 43-year-old was found at his rented room on Wichit Songkram Road, Soi 1 on Monday. For the initial report click here.

Surat Thani Police arrested Watcharin Srinin, 22, at his uncle’s home in that province yesterday. He was transferred to Phuket and made to carry out a re-enactment of the crime this morning.

He told police he met Mr Pirasak about a year ago and moved in with him after losing his job a few months ago.

The older man forced him to have sex and verbally abused him when he refused, he claimed.

At about 10pm on the night of April 22, Mr Pirasak once again demanded sex. Mr Watcharin refused and went out to see friends to avoid further abuse, he said.

When he returned at about 3am, the deceased reportedly told him he had sex with another person and yelled at him.

The ensuing stream of verbal abuse infuriated the younger man, so he picked up a heavy wooden rod and hit Mr Pirasak on the head. The blow knocked Mr Pirasak off his mattress.

Mr Watcharin told police he slit Mr Pirasak’s throat before dragging the body to the bathroom door and covering it with a blanket.

He then fled with his victim’s wallet, using the money to pay for his trip to his uncle’s home.

Recovered as evidence during the arrest was a mobile phone registered to the deceased, police said at a re-enactment of the crime this morning.

Mr Watcharin will be charged with premeditated murder, police said.