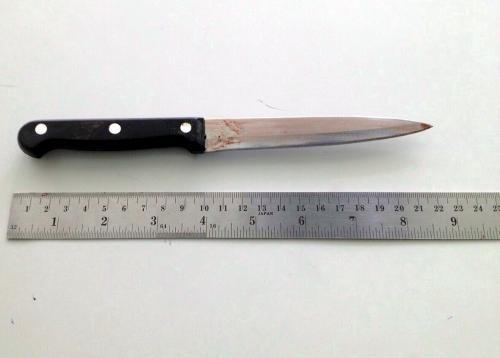 PHUKET: A 17-year-old woman was fatally stabbed as she fought off a man trying to steal her necklace in the early hours of yesterday morning in Rassada.

The woman, Wassana Lerdsongkram, had gone to a Lotus Express with her 2-year-old nephew after midnight yesterday morning. Witnesses told police that a man followed her into the store, where his image was captured by CCTV cameras, and then went outside to wait for her.

“As Ms Wassana was walking home, along Soi Tankul off of Theppratan Road, the man came alongside her on his motorbike and started talking to her,” said Somchai Nooboon of the Muang Phuket Police.

“When she ignored him, he grabbed her gold necklace and ripped it off.

“Ms Wassana attempted to retrieve the necklace, so he pulled out a knife and stabbed her in the back,” Capt Somchai said.

“She screamed for help, and a teenage boy ran over and kicked the man’s motorbike out from under him, causing him to fall down.

“At that point, the thief tried to run away. The boy caught him and restrained him, but the man was bigger, and threw him off, then got on the motorbike and rode away.

The circumstances of Ms Wassana’s death are similar to those of Australian travel agent Michelle Smith last year (story here), causing Capt Somchai to issue an advisory to island residents.

“Don’t walk alone late at night,” Capt Somchai said. “And if a thief tries to steal something from you – a necklace, a telephone, a purse, whatever – let him. Your life is more valuable.”

Police are still searching for the man who stabbed Ms Wassana. Once arrested, he could face life in prison, if he receives the same sentence as Mrs Smith’s killers (story here).