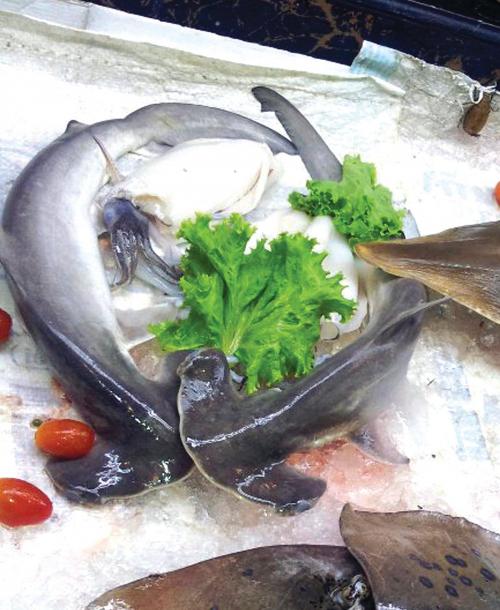 PHUKET: Local concern peaked in Phuket after photos began to circulate of two baby scalloped hammerhead sharks on display in front of a restaurant in Kata last week.

“The ones [scalloped hammerhead sharks] at that restaurant clearly show to everybody that they are fetuses – they are not fully grown sharks, so obviously fishermen caught a female shark somewhere, chopped her open and that’s what was inside,” said Tony Andrews, Thailand’s West coast PADI Regional Manager and Project AWARE Ambassador, who was notified of the fetal sharks on display by a local diver.

“If you look at the back dorsal fin, it’s not developed yet. If you look at it closely, it actually looks like it has feathers instead of a fully developed fin,” Mr Andrews added.

At this year’s Convention on International Trade in Endangered Species of Wild Fauna and Flora (CITES) Conference in Bangkok, protection was increased for five commercially-exploited species of sharks and manta rays, one of which was the scalloped hammerhead shark.

“The 16th Meeting of the Conference of the Parties to CITES will be remembered as a historic moment in shark and ray conservation,” said Bryan Arroyo, head of the US delegation to the CITES meeting.

However, the species was added to the CITES Appendix II – an action that means increased protection, but still allows legal and sustainable trade.

“According to the announcement from the Ministry of Natural Resources and Environment notification in Phuket BE 2553, scalloped hammerhead sharks are on the list of ‘beautiful’ protected fish species.

It clearly states that fishing for or possessing any fish on the list is illegal,” Dr Ukkrit explained.

The possession of any scalloped hammerhead sharks or other members of the Sphyrnidae family for research, breeding and aquaculture, as well as selling the living animal must be approved by the governor or the Phuket Fisheries Department, Dr Ukkrit said.

“However, there is no penalty for buying or selling this species for food,” he explained.

Whale sharks are the only species of shark protected by the Wildlife Preservation and Protection Act BE 2535, which makes it illegal to hunt, keep in captivity or eat them, Dr Ukkrit said.

In response to concerned citizens who noticed baby scalloped hammerhead sharks also on display several months ago, Narin Meewong, an officer of the Phuket Fisheries Department, led a team down to the popular tourist area to investigate.

“We went to check the market area in Kata about three months ago and found that shark was being sold as a food item.

“Specifically, we found scalloped hammerhead sharks that were accidentally caught in the fishermen’s nets,” he said.

“We are trying to preserve the number of sharks in our oceans by advising fishermen to free the sharks if they find them caught in their nets,” Mr Narin added.