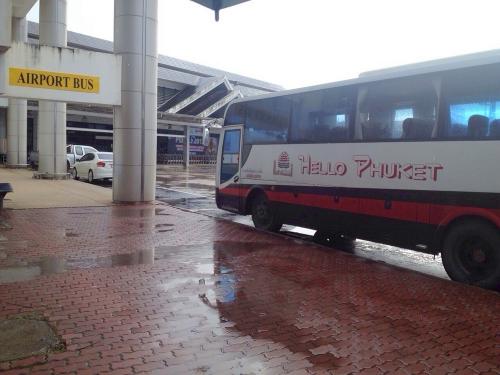 “The bus service will return to the full schedule on August 16,” Prakob Panyawai, the owner of the bus company, confirmed to the Phuket Gazette.

Services were pared back in response to poor passenger numbers in the initial weeks following the July 19 launch (story here).

“The bus stop was simply too dark in the evening. There was no light there… Also, there were no signs pointing to the bus stop, which meant tourists did not know where the bus stop was located,” Mr Prakob said.

In response, the airport authorities have begun installing a battery of new signs in a variety of languages to highlight the bus services to tourists arriving on Phuket.

“We are adding more signs inside and outside of the terminals, and lights have been installed where the airport bus is located,” Phuket Airport Customer Service officer Pakin Sirijun explained.

“The signs will be in Thai and English. As English is an international language, we believe these two languages will be good enough,” he added.

The move to install signs informing tourists of the airport bus comes amid a project to install a slew of new general information signs in a variety of languages.

“I have assigned staff to sticker signs throughout the terminal in Thai, English, Russian and Chinese. Phuket Airport Director Pratuang Sornkham plans to add Korean later as we want to make Phuket Airport a genuinely international facility,” Mr Pakin said.

All the new signs, indicating directions to baggage claim, immigration, rest rooms and other general areas, are expected to be posted by next week, he added.

“We are doing our best to serve tourists arriving in Phuket. The signs will be placed in better locations, in several languages for improved convenience for travellers,” Mr Pakin said.

Mr Prakob told the Gazette that the full bus service will resume with one change to the timetable: the 7:30pm bus departing the airport has been moved forward to 5pm.

“Many flights arrive at about 7:45pm, and passengers arriving on these flights would miss the 7:30pm bus anyway,” said Mr Prakob.

“So we moved the 7:45pm bus forward to better serve tourists arriving in the afternoon,” he explained.

“The rest of the full schedule remains the same as before,” he said.

For more details of the new bus service, including times and fares, visit PhuketAirportBusExpress.com.