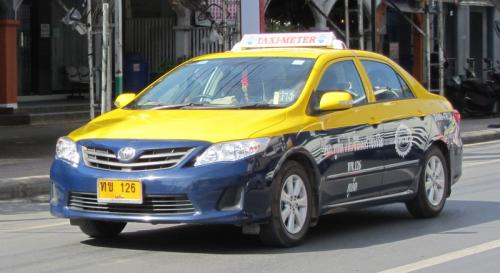 PHUKET: The Phuket Land Transportation Office (PLTO) will seek help from the Highway Police to tackle metered taxi drivers who refuse to use their meters.

“I am aware that many tourists are unhappy with taxi drivers. We are going to talk about how to stop metered taxi drivers from cheating,” PLTO Chief Terayout Prasertphol told the Phuket Gazette.

However, Somsak Poknaungnong, an official at the PLTO, told the Gazette that, “We don’t keep a record of the number of drivers we catch breaking the rules.

“As far as I can remember, we have fined seven drivers, some for not turning on the meter, some for driving a taxi illegally,” he said.

“Using checkpoints is not a good way to solve the problem,” he continued. “Drivers who have been stopped call their friends to warn them about the checkpoint.”

The PLTO has clear penalties in place for drivers who violate the rules.

Drivers can be punished for failing to turn on the meter, charging the wrong initial hire price and refusing to pick up customers.

The fine for a first offense is 500 baht; for the second, 1,000 baht; for the third, 2,000 baht. If drivers violate the rules four times, their license to drive a taxi is revoked immediately, Mr Terayout said.

Phuket’s penalties differ from those in Bangkok, where drivers are charged 1,000 baht regardless of how many times they have breached the rules.

“The Land Transport Department is proposing to change the rules,” he said.

“The driver will still be fined the first time he is caught, but the second time he will have to stop working for seven days, and the third time, his taxi driving license will be revoked immediately,” he said.

If the measure is approved in Bangkok, it will be adopted in Phuket too, he added

Metered taxi drivers have not only the PLTO to fear, but also Airports of Thailand (AOT), which operates Phuket International Airport and has its own set of penalties for drivers.

But only five metered taxi drivers were punished by the AOT last month, Prasat Pechwang, a taxi driver and a member of Phuket Taxi Meter Service Co Ltd says.

Each of the drivers was punished for not turning on his meter when transporting passengers. Some had also been impolite to tourists, or were wearing the wrong uniform, Mr Prasart said.

The enforcement arm of the AOT is the passengers themselves, using the telephone number given on the taxi ticket they receive.

“Passengers can call the 1584 hotline 24 hours a day to make a complaint about drivers,” Mr Prasat explained.

The AOT punishment is harsher than the PLTO’s: any driver who operates his taxi without turning on the meter will be ordered to stop using the car to serve passengers at the airport for three to seven days, he said.

“We tell taxi drivers to turn on the meter every time they pick up passengers,” Mr Prasart said.

However, in a bizarre if not inexplicable twist, he went on to admit that the company does allow drivers to reach ‘private fare agreements’ with their passengers, adding, however, that even in these cases they must turn on their meters in order to avoid breaking the rules.

“The [metering] system is in place to protect first-time visitors,” he said.

“But tourists who are familiar with Phuket and who want to negotiate a fare directly with their driver are free to do so,” he added.