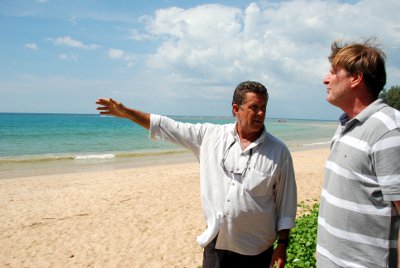 PHUKET: At least three surfing locations at Phuket beaches are being shortlisted for recognition as National Surfing Reserves (NSRs).

“The surfing reserve concept is a symbolic dedication whereby surfing areas are recognized as coastal resources worthy of conservation; a reserve is essentially a badge of merit, a proactive endorsement to recognize iconic natural locations around the world,” said Mr Farmer.

In Australia, Mr Farmer’s home country, the NSR project has gained much high-level support, including that of state premiers.

“Beaches are Thailand’s great income generators, so it makes sense to recognize the special attributes of the coastal resources, such as surfing areas,” he noted.

There are currently 14 NSRs in Australia, two in Hawaii and several more under review in the region, including in Indonesia, Sri Lanka, the Philippines and China.

“The creation of a surfing reserve in Thailand, the first in Asia, is a golden opportunity for Thailand to show its forward thinking and proactive effort toward conservation on the Andaman Coast,” said Steven Andrew Martin, a coastal researcher with Prince of Songkla University’s Faculty of Environmental Management.

“Thailand is being considered for this distinction not only because of the existence of the natural resource, but because it is a safe and accessible destination with a favorable climate of environmental awareness, especially with tourism,” he explained.

Mr Martin added that surfing in Thailand is gaining in popularity and surfers are inevitably custodians of the coastal environment.

“The surfing reserve program globally promotes stewardship of the natural environment, including the reefs and aquatic life,” he said.

“If anything good came out of the 2004 tsunami, it was the rise in awareness of coastal resources and the support from the Thai government alongside international organizations and NGOs.

“It’s really an honor that Brad has taken the initiative to visit Phuket and consider surf sites, such as Kata, Kalim and Nai Yang Beaches, for this internationally-recognized distinction,” he added.