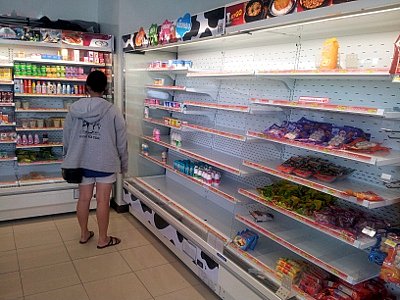 PHUKET: Top officials at Phuket government offices yesterday met to discuss critical issues with product shortages and prices hikes in Phuket brought on by the floods in and around Bangkok.

Phuket Provincial Administration Organization (OrBorJor) President Paiboon Upatising said that his organization had received many complaints from Phuket residents about the product shortages and rising prices.

“Next week, I will personally inspect the prices of goods at the stores that I have received reports about – and I will go there with officers from all the relevant government units,” he added.

Mr Paiboon urged people to stay calm and not panic over the crisis – and not to hoard goods.

“Doing so in itself can cause shortages of products in the market,” said Mr Paiboon.

“We will not have any shortage problems if people do not hoard goods. For example, we will not have drinking water shortages because we have our own water-producing factories here. Some goods that we can no longer produce, the government has already imported from neighboring countries,” he added.

The OrBorJor with cooperation from private business will soon hold special markets so local residents will have access to consumer goods at normal market prices, Mr Paiboon added.

“The market will be held at Phuket Community Hall on November 7-10 so people can by essential household goods such as rice, instant noodles and other things at cheap prices,” he said.

A similar market held on Thursday and Friday by the Phuket Chamber of Commerce was sold out within hours.