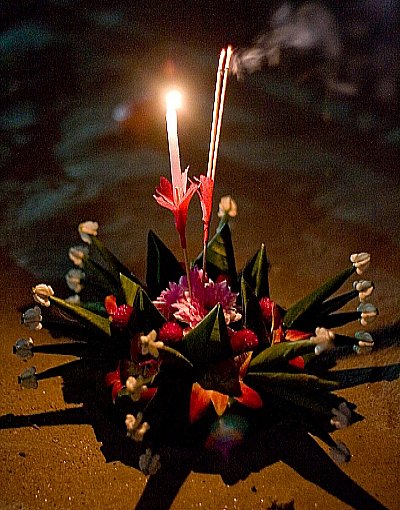 PHUKET: Loy Krathong, the “festival of light,” is on November 10 this year and will be celebrated by communities across Phuket and all of Thailand.

Thousands of people across the nation will be releasing krathong, lotus-shaped floats traditionally made of banana leaves, with a small offering of food, flowers, joss sticks and/or candles into the waters of Thailand.

This annual festival takes place on the full moon of the 12th lunar month of the year.

For those interested in participating in, or simply observing, Loy Krathong this year, here is a list of just some of the events to be held around the island:

Wednesday
6pm: Performances on the main stage (near the police box at the end of Soi Bangla), cultural performance by students from Thaksin University in Songkhla, followed by the Patong Entertainment Business Association’s presentation of scholarships.

The Patong Miss Noppamas is open to all women, Thai or foreign. For more information call Patong Municipality at 076-342078.

The festival will be in the theme of “Yesteryear Phuket”.