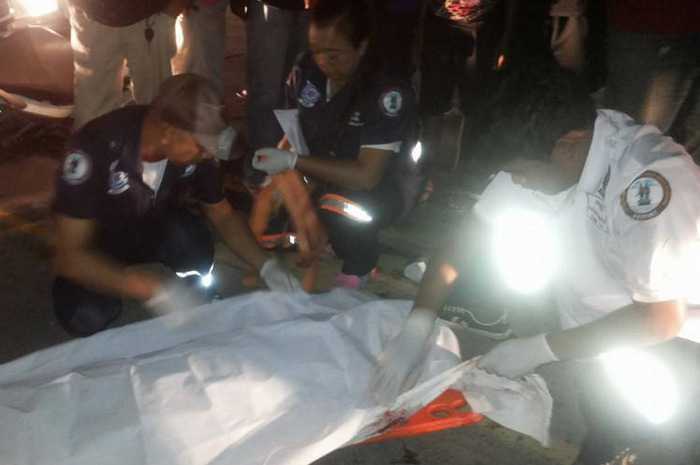 PHUKET: A Mercedes-Benz and a motorcycle collided at 12:10am today, resulting in the first fatality of the Seven Days of Danger safety campaign – which targeted zero deaths.

The Mercedes, driven by Chaichana Seaong, 40, collided with the motorcycle in front of the Mook Phuket shop on Chao Fa East Road, near the Kwang Road intersection.

Witnesses claim the the bike, a Honda Wave driven by Boonyasith Lekchai, 16, swerved in front of the car. Riding pillion was Anoma Muangpanij, 20, from Kanchanaburi, who died in the crash.

Police investigations are ongoing, the Phuket Gazette was told.

However, nine motorcycle accidents, two involving foreigners, were reported during the official first day of this year’s campaign, reported the Department of Disaster Prevention and Mitigation (DDPM) Phuket Office.

The first accident in this year’s campaign occurred at 6:30am yesterday in Patong. Saksit Bannarak, 19, fell from his motorcycle near Loma Park along the beachfront road. He was transferred to Vachira Phuket Hospital in Phuket Town.

The first foreign accident victim was Peter Bloemert, 25, from Canada, who was injured at 7am, when a vehicle cut in front of his motorcycle in Patong. He was taken to Patong Hospital.

Tantima Thavorn, 30, was admitted to Vachira Hospital after an accident involving a failed overtaking maneuver.

Winai Langoo, 15, was also admitted to Vachira Hospital after he fell from his motorcycle in Phuket Town.

At 9:20am, Kongfah Silarattanasakul, 34, was hospitalized in Thalang after an accident in Baan Mai Khao.

Rachane Sumalai, 32, fell from his motorcycle on Nanai Road, Patong, at 8:40pm. He was taken to Patong Hospital then transferred to Vachira Hospital.

A Vietnamese national named by the DDPM only as “Mr Sen”, 42, also had a single-vehicle motorcycle accident on Nanai Road. He was not wearing a helmet at the time. He was admitted to Patong Hospital then transferred to Vachira Hospital.

Sarawut Dujpayak, 21, was involved in a road accident in Phuket Town. He was taken to Bangkok Hospital Phuket.

The nationwide Seven Days of Danger road-safety campaign for the New Year holidays started at midnight on December 30.

Ahead of the launch of the campaign this year, Phuket Governor Nisit Jansomwong last week confirmed that police checkpoints and emergency rescue units have been set up to deal with a possible spike in road traffic incidents during the holidays (story here).