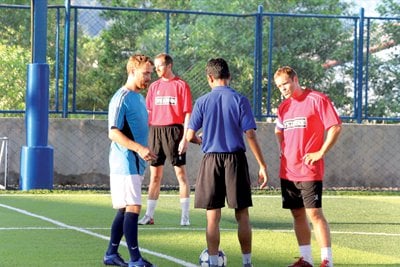 Following two quick goals by Karl Ward, it seemed Morning Star would make light work of their opposition, but The Lounge emerged from their slumber and fought back to bring themselves to within a goal at 4-3. A disallowed score almost put The Lounge level and with that stroke of fortune, Morning Star rose to the opportunity by putting the result beyond doubt adding further goals by Choo Chai and Ward again. The Lounge v Morning Star 3 – 6.

An improving Eden FC played the young Phuket Serenity Villas (PSV) team in the evening’s second fixture. After losing their two first games, Eden came out surprisingly strong and a controversial goal in the first few minutes of the game gave them the lead. But it didn’t take long before PSV equalized with a goal from Songthum Saesue.

From there the game remained balanced until PSV’s Sonthaya Chooseangjaw scored an own goal from a corner to give Eden the lead once again. A penitent player, Sonthaya got his team back on level terms just before team mate Sascha Wondruschka headed PSV into the half time break with a 3-2 lead. PSV kept their forward momentum in the second-half to leave Eden praying for an answer, but goals from Pakorn Boonkhwan, Songthum and Wondruschka ensured Eden were left to walk the wilderness of defeat once more. Eden FC v Phuket Serenity Villas 3 – 6.

Shakers FC and Aladdin were third on the fixture sheet and it was Axel Jehangir who opened the scoring for Shakers before grabbing a second soon after to give his side a 2-0 lead. Geoff Carter added a third when the Aladdin goalkeeper gifted the ball to him. Ross Robinson grabbed a fourth goal, before Stig Edvardsen pulled one back for Aladdin near the end of the first half.

The second half saw lots of pressure on the Shaker team, but neither team could hold possession for long. Aladdin’s Boy stole their second goal, and with another strike were back in the hunt at 3-4. However, Carter capitalized on a mistake by Aladdin’s defense to make it 5-3, and two more Shakers’ goals ended the contest. Aladdin v Shakers FC: 3 – 7.

League favorites Ristorante Rugantino took on Babynoname in the fourth match of the night and gave the crowd a thrilling to-and-fro battle to savor. A total of 18 goals were netted with both teams taking the lead or going behind regularly. Not until the score reached 8-8 did Rugantino surge ahead with two strikes to win 10-8. Ristorante Rugantino v Babynoname: 10 – 8