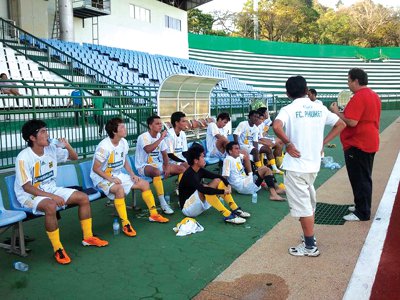 PHUKET: A new-look FC Phuket played their first pre-season, friendly match recently with Tuk Tuk FC, an outfit of the Le Meridian resort, resulting in a 7-0 goal fest for the home boys.

The free-admission match played at Surakul Stadium was a confidence-booster for the Southern Sea Kirin if anything.

It was a chance for fans to see their new team in action for the first time since January 14 when they suffered a 3-0 loss to Chainat FC, and finished the season in ninth place.

The one-sided contest served as a teaser for what Phuket’s new Serbian head coach, Milos Josic, has been putting together, and what we might expect from the coming season, which opens later this month.

The scoring opened just after the 10-minute mark when Phuket’s Byeon Seong applied his speedy advantage in a drive penetrating Le Meridian’s defensive back line.

A contested ball made its way to Watcharapong who took a shot at goal, which was deflected back to Thawin, who sent it to the back of the net.

The next goal came about 10 minutes later by Nenebi who drilled in a perfectly weighted cross pass from Byeon Seong Won.

Less than 10 minutes later, it looked like Nenebi would score again, but his strike was denied this by an offside flag.

Both Koreans on the pitch showed off their speed and marvelous ball control skills to open scoring opportunities for Phuket’s Thai strikers.

After several shots at goal, FC Phuket would manage to beat Le Meridian’s goalkeeper again in the final minute of the half.

Byeon Seong Won crossed from a corner kick which found the head of Watcharapong, who sent the ball to the net at the near post.

Norwegien Stig Edvardsen was also fielded for Phuket in the second half, though he only managed to earn a yellow card for aggressive play five minutes in.

Backed with J-league experience, Atushi led a drive along with Suwit Na-jamroen (previously played for Chaiyaphum) resulting in the game’s seventh and final goal.

FC Phuket’s next pre season match was against Phangnga FC on Friday (March 2) at Phang Nga provincial sports field, which was taking place as this issue was going to press.

The signing comes as a disappointment to fans hoping Phuket would re-sign the Frenchman.

Now Matijas can continue to expand his fan base in the South as he vies for promotion to the Thai Premiere league with his new side.

In addition to Songkhla FC and FC Phuket, Krabi FC and Pattalung FC are two more southern teams who will be vying for promotion in 2012 from Division 1 to the big leagues.

FC Phuket are set to open the season on March 18, against JW Rangsit.

For the latest schedule changes, updates and news about FC Phuket and Southern Thai football, keep checking the Phuket Gazette.