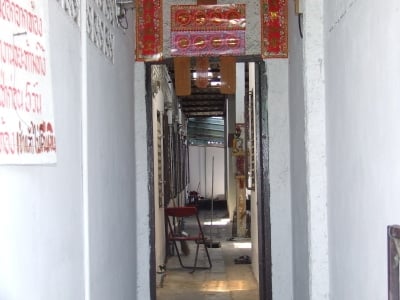 RASSADA, PHUKET: Police are hunting two men they believe stabbed a neighbor to death in Phuket on Sunday night for making too much noise in an apartment block.

Ponsan Noi-oonsaen, a 41-year-old Chiang Mai native, died around 10:30pm after being stabbed at least five times in the chest with what were described by a witness as “foot-long knives”.

Mr Teeradech told police the pair were drinking and cooking in the corridor of the Jaroen Thawee budget apartment block on Srisutat road in Rassada.

A man yelled from another room telling the pair to be quiet, Mr Teeradech said.

When Mr Pongsan went to the man’s door to apologize, two men emerged and stabbed him to death, he said.

When the men approached Mr Teeradech, he ran into his room and locked the door. The two men sped away on a motorcycle, he said.