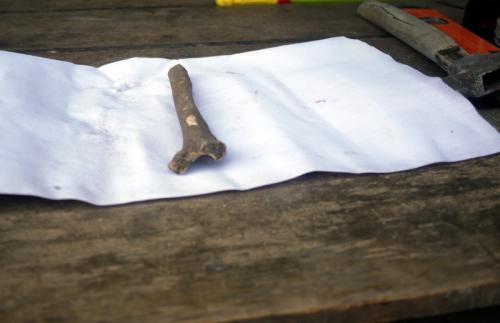 PHUKET: Sea gypsies in the southern Phuket beach area of Rawai panicked after discovering a bone believed to be human buried underneath a house.

The bone could be up to 100 years old, said Panuwat Uasamal, an archaeologist at the Fine Arts Department Office in Phuket, who was contacted by the sea gypsies.

The bone was discovered under Waek Lakkoh’s house while a neighbor was repairing one of the support poles under her home.

“We found the bone at about 8pm. After discussing it with neighbors, we decided to stop the house repairs for now,” the 88-year-old homeowner said.

“We were scared. If it belongs to an ancestor, we will keep it and worship it after the experts finish examining it,” she added.

Ms Waek confirmed there have been no reports of any paranormal goings-on connected to spirits or ghosts in the village since the discovery.

Fine Arts archaeologist Panuwat said the bone was found in a shallow hole about 30cm deep.

“The bone is from the lower part of a human arm. From visual inspection, we believe it is about 50 to 100 years old,” he said.

“Villagers told me that in the past when digging holes for water pipes, they found shards of pots and bones. This time, the villagers dug around the hole at the same depth, but no more bones were found.”

Mr Panuwat, satisfied there are no other relics to be found in the immediate area where the bone was found, said the repairs to Ms Waek’s home can continue.

“We will examine the bone further to see if we can learn any more details from it,” he added.