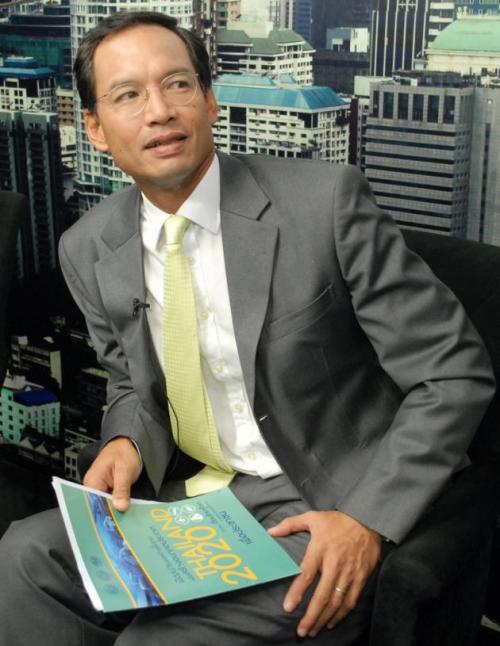 Some said the content of the amendment in the submitted bills had been changed after Pheu Thai MPs discussed the bill with the senators, asking for their support.

Their decision, however, will not affect the move to push for charter amendment. The three amendment bills have been co-sponsored by coalition MPs and many senators, including some appointed senators. Among 248 signatures supporting three separate bills submitted on Wednesday, 50-60 signatures came from senators.

The law requires one-fifth of the total MPs (100) or total parliamentarians (130 MPs and senators) to propose charter change.

Senator Nirand Praditkul said yesterday that he and five other senators had withdrawn their names from backing the amendment bills.

He said he backed charter amendments not because he wanted to help particular political parties or because he had received an order from former PM Thaksin Shinawatra.

He said he supported the four provision amendments because Nonthaburi Senator Direk Thuengfung, who chaired a reconciliation panel, had proposed similar amendments.

“So, the amendments will not benefit any particular group,” he said. He added that he also supported the amendment to Article 68 that seeks to ban individuals from having direct access to the Constitution Court to initiate litigation for disbanding a party.

Nikom said the amendment would not limit the rights of individuals but would simply set guidelines on how to seek rulings of the Constitution Court. He said he did not think the Office of the Attorney-General would be dominated by politicians in power.

Nikom also reprimanded the group-of-40, who had come out to oppose the three amendment bills. He said they used to be members of the post-coup National Legislative Assembly before they were appointed senators. All in all, the 40 senators would have been in office for 11 years. “Now, when the people will have the right to elect senators, they are afraid of their future,” he said.

Nikom said yesterday that senators were senior people who should not have been fooled. Those who gave their names in support of charter amendments only to withdraw their names later, then “should go to hell”.

Opposition and Democrat leader Abhisit Vejjajiva said the Democrats would check the three bills thoroughly before the party makes its stand.

He added that he had preliminarily seen that the amendments would limit the people’s rights and these amendments might be unconstitutional.

Korn questions Bt2-tn loan bill
The Nation / Phuket Gazette
PHUKET: Democrat Party deputy leader Korn Chatikavanij yesterday expressed serious concerns about the Bt2-trillion infrastructure borrowing bill proposed by the Yingluck Shinawatra government as it might violate the Constitution, which stipulates that any government expenditure should be allocated only through the fiscal expenditure budget bill.

Speaking on the Business Talk programme on Krungthep Turakij TV, he said if the borrowing were more transparent, Parliament would be able to systematically evaluate the details of the infrastructure projects proposed by the government. The government also needed to declare to Parliament what they would do about the projects. Meanwhile, the Finance Ministry could study the sources of the finances to invest in the projects.

“As the opposition, we will seek the Constitution Court’s interpretation of the Bt2-trillion bill – whether it violates the law,” said Korn, a former finance minister.

Korn said he agreed and supported the Yingluck government’s investment in the country’s infrastructure and communications system, which would account for about 80 per cent of the Bt2-trillion budget. The government, however, had not revealed any details of the infrastructure investment projects or even conducted a feasibility study if the projects are worth developing.

“My only concern is the source of the investment and the way they got the money,” he noted.

The Bt2-trillion infrastructure borrowing bill, which will allow the government to raise the entire amount by end-2020 and require it to clear the debt in 50 years, got the Cabinet’s approval on Tuesday. Including accumulated interest, the total loan burden for the Bt2-trillion budget will be about Bt5.1 trillion.

Korn said that the B2-trillion bill gave no information about the infrastructure projects. The bill only gave legal authority to the government to provide a huge amount of loans. They provide no guarantee on returning by those borrowing the money, whether it will be worth it or not.

“I believe in the government’s ability to facilitate nominal GDP growth at 7 per cent annually as the actual GDP growth will be about 4 per cent plus another 3 per cent inflation. However, the government’s rice-pledging scheme will create a big loan burden of Bt410 billion by the end of this year, and the burden will be increased by between Bt200 billion and Bt300 billion every year as long as the government continued its rice-pledging scheme. This means that the public debt level will be increased by 2 per cent and 3 per cent of GDP every year,” Korn said.

He add that if the government continued to push policies that damaged the country, Thailand’s economy had a high possibility of a crisis as the level of public debt would surge to between 50 per cent and 60 per cent of the country’s GDP.