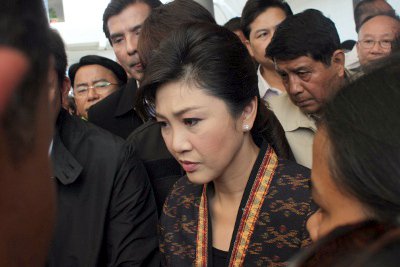 PHUKET: Prime Minister Yingluck Shinawatra arrived at Phuket Airport this morning to be greeted by some 2,000 people protesting the need to protect their land usage rights and preserve traditional livelihoods.

The protesters, who collectively call themselves “PMOVE” (short for “Peoples’ Movement”), comprise sea gypsies and members of other landless communities from across the country.

In addition to the many people from Phuket, some members of the PMOVE network at the airport today traveled from Ranong, Phang Nga and Krabi provinces on the Andaman Coast, as well as Songkhla and Prachuap Khiri Khan on the Gulf Coast, and as far afield as Ubon Ratchathani in northeast Thailand.

As PM Yingluck made her way through the crowd outside the arrivals terminal, she was approached by PMOVE leader Tuttiporn Thippawong, who read a formal letter of complaint listing three main “issues of concern”.

The first issue raised was the right for sea gypsies to be allowed to continue fishing in marine national park waters using traditional methods.

“More than 20 sea gypsies from Rawai [at the southern end of Phuket] have been arrested and charged for illegally fishing in marine national parks. This [issue] affects more than 40 sea gypsy communities throughout Southern Thailand. We want the right to maintain our traditional lifestyle and livelihoods. This is how we support our families,” said Ms Tuttiporn, herself a sea gypsy and Phuket native.

The PMOVE leader also called for the government to issue “Community Chanote” land title deeds to allow landless communities to continue living on land they have occupied for a long time, many generations in some cases.

The Community Chanote scheme, created under the former Democrat government of Abhisit Vejjajiva, allows communities to live on the land and use it for agriculture, but does not allow the land to be sold.

However the current administration has not moved forward with the plan, reportedly out of fear that it could lead to more encroachment on state land.

Ms Tuttiporn explained to PM Yingluck that more than 2,000 sea gypsies living in Rawai were also facing forced eviction following the presentation by a developer of a land document covering much of the land their community sits on.

Problems faced by sea gypsy communities like the one in Rawai began to increase markedly after the 2004 tsunami disaster, she said.

The Phuket Gazette notes that the Rawai sea gypsies have lived – uncontested – at their current beachfront location at the southern of Phuket for at least three generations.

The issue of poor, local people being forced to relocate by developers who present land documents is hardly new in Phuket.

Some 2,000 families on Soi Kingkaew, a former mangrove forest in Rassada, were recently confronted with a similar threat.

Two other communities with PMOVE membership fighting similar battles on the island include the “Community Behind Rama IX Park” in Phuket Town and the “Khok Tanode Community” in Chalong.

PMOVE wants the government to set up an investigative committee to address the most pressing concerns faced by the communities in its network, such as overpriced water and electric power supply.

PM Yingluck agreed to this.

“I will look into it. The government will try to solve these problems for you. We will set up a special committee to look into and to come up with solutions,” PM Yingluck said.

After her encounter with PM Yingluck, Ms Tuttiporn told the Phuket Gazette, “We are happy to hear that the prime minister is willing to at least look into the problems. However, we will follow up to make sure the government is serious about addressing our concerns.”

In the run-up to the “mobile cabinet” at the Prince of Songkla University (PSU) Phuket campus tomorrow, PM Yingluck will today travel to Phang Nga to discuss funding for women’s groups in the Andaman region.

During her trip she is also scheduled to visit the Tsunami Memorial Monument as well as the beached Tor 813 Marine Police patrol boat that washed ashore at Ban Bang Niang, near Khao Lak, on December 26, 2004.

On returning to Phuket, the prime minister will inspect the site of the proposed Klong Koh Pee Road project in Wichit and open a One Tambon One Product (OTOP) fair at nearby Saphan Hin.

From there PM Yingluck is scheduled to inspect the meeting venue at the PSU Phuket campus on her way to the Hilton Arcadia Resort and Spa in Karon, where she will spend the night.