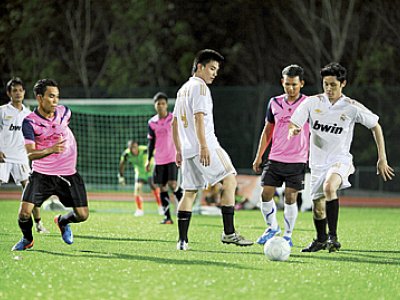 PHUKET: Thanyapura Sports and Leisure Club (TSLC) hosted another action filled evening of the Adult Futsal League on Thursday with one Premier Division match and two First Division games on the card.

Honda’s season didn’t improve suffering a 6-0 drubbing at the hands of league leaders Portrait FC. Pace and clinical finishing were the difference between the two sides, leaving Honda exhausted and trailing in the table..

The Division One matches were started by Chevrolet and SGS with the former looking to replace the former at third place on the table. Chevrolet played good possession football in the first half and worked a deserved 2-0 advantage going into the break, but within minutes of the restart SGS reduced the deficit. Sensing an opportunity to get back into the game, SGS pressed forward for the equalizer and twice got hit on the break as Chevrolet gained their third win of the season with a score of 4-1.

The final game on the Division One field saw the top two teams of TSLC and Ultraman battle for points. Ultraman needed a victory to keep their title aspirations alive, but it was TSLC who started on the front foot and moved ball around well to score three unanswered goals inside the first half. Ultraman decided on a tactical change after the break and replaced their goalkeeper with a sweeper to create an extra outfield player advantage to try and get back into the game. Unfortunately, the tactic backfired with TSLC scoring six more goals from breakaway attacks.

Ultraman did manage to find the back of the TSLC net twice, but it proved fruitless in the end. TSLC ran out 9-3 winners, the result also earning them the Division One title with one game still remaining.