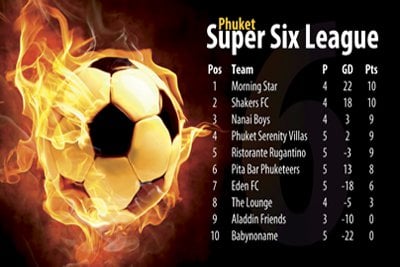 PHUKET: Super Six League’s latest round of matches at Headstart International School’s Football Island kicked off with a top of the table battle between Phuket Serenity Villas (PSV) and Morning Star.

Both teams attempted to gain control of the game from the outset, but Morning Star proved the more inventive in attack and had a four goal advantage going into the break with scores by Simon Smith, Pedro Carrera (2) and Karl Ward. PSV rallied at the start of the second half with a goal from Watcharapong Somsong. Unfortunately for PSV the comeback was short-lived as an in-form Carrera bagged another three goals for a comprehensive Morning Star victory. Phuket Serenity Villas v Morning Star: 1–8.

Eden FC and Babynoname’s encounter was certain to be tense with both teams in desperate need for league points. Neither team were able to capitalize on any chances created in the first half that left the scoreboard untouched going into the break. Eden FC started the brighter for the second half and it was Joseph Arimathea who scored the only goal of the game for an important three points. Eden FC now have back to back wins while Babynoname continue to struggle without points. Eden FC v Babynoname: 1–0.

In the third game of the evening, Alberto Mancuso’s Ristorante Rugantino were up against Aniel Debie’s progressive Nanai Boys. Sunny Gulati opened the scoring for Nanai Boys before Rugantino deservedly pulled one back, but a further brace by Gulati earned him a hat-trick and helped his side to a 5–3 half-time lead. In the second half, Nanai Boys kept up the pressure and crept further ahead with a goal by Danilo D’Albenzi. Although Rugantino pulled another back through Jacopo Jajo, Nanai Boys defense and in particular Ryan Adekoya allowed nothing to pass and added two more goals for a comfortable victory. Ristorante Rugantino v Nanai Boys: 4–8.

The evening’s last match was an entertaining and high scoring affair between Pita Bar Phuketeers and Aladdin. Ding Yama opened the scoring for Phuketeers after good work by Natalio Santos before Aaron Bichler’s strike before half-time gave the Phuketeers a 5-2 lead. Bichler completed his hat-trick in the second-half to ensure Phuketeers wrapped up another fine performance with a five goal advantage. Pita Bar Bhuketeers v Aladdin Friends: 11–6.