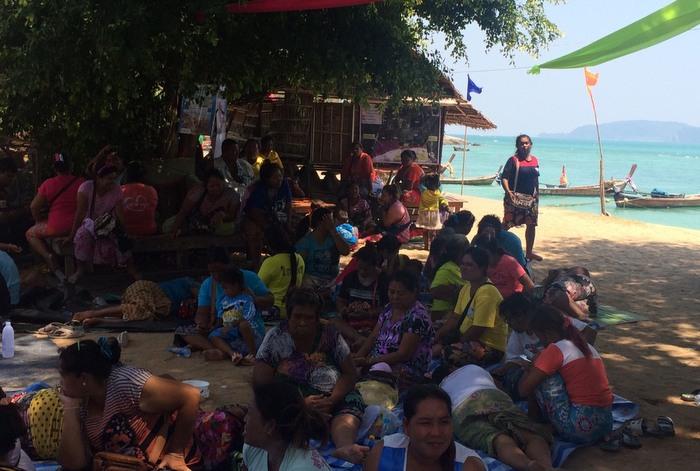 PHUKET: More than 200 sea gypsies yesterday prevented Baron World Trade Company from building a wall that would prevent the seafaring nomads from reaching a ceremonial site on land the company claims to own.

Baron World Trade Company, which is one of a number of investors who claim to own Rawai seaview land currently occupied by the sea gypsies, sent a number of construction workers to their 33 rai plot to start building a wall across the access path to the ceremonial site.

“When we realized that they were going to build the wall, we immediately gathered a group together to prevent them from doing so,” said sea gypsy representative Sanit Sae-Chua. “We refuse to let them build a wall.”

Police officers arrived at the scene to prevent the situation from escalating to violence, as it did when more than 30 gypsies were injured during a confrontation in January (story here).

Governor Chamroen Tipayapongtada has already set up a team to measure an alternate access way, about three meters wide, and asked for an additional three meters of land to create a wider path (story here).

However, community leader Ngeem Damrongkaset said that the sea gypsies had turned down this offer from the provincial government and insisted on using the original way to the shrine and beach through disputed land.

“We urge the Land Department to inspect the land deed of this plot as well. We do not mean to reclaim all of the land, but we want our original path, the shrine and the beach access to be excluded from this plot of land,” Mr Ngeem said last month.

In response to the latest effort by the sea gypsies to prevent Baron World Trade Company from building on their property, the company has filed another round of land encroachment charges against the locals.

A Decade Ago: Jet-ski and guide woes