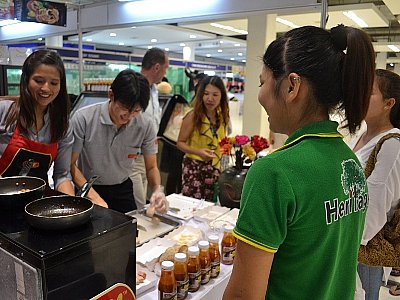 PHUKET: Heavy rain on Phuket this week has provided a handy boost to the inaugural Andaman Hotelier hospitality expo, which attracted nearly 3,000 visitors on the event’s opening day on Thursday.

The event, which cost 3 million baht to stage, is open from 11am to 9pm at HomeWorks on the bypass road until Sunday.

“In the past, each of us separately organized our own activities. But this time, with support from the Phuket Skills Development Center and the Tourism Authority of Thailand, the six clubs in the same industry are able to stage a united show,” Mr Vasan said.

There are more than 90 booths at the show, highlighting hospitality wares ranging from F&B products such as drinks, ice cream, bread and sausages to kitchenware to fully integrated air-conditioning systems.

Exhibitors ran the gamut from large-scale suppliers to local companies.

“We have been supplying beef, chicken and pork sausages to more than 100 four- and five-star hotels in Phuket for about seven years, as well as others in Phang Nga and Krabi,” she explained.

“Being a part of this exhibition is helping us to raise brand awareness among Phuket residents since our products are not sold individually elsewhere other than at Villa Market in Chalong,” Ms Onuma added.

“We have been supplying juices, such as orange, pineapple and mango, for six years and gelato fruity ice cream for two years to our 150 customers, who are mainly hotels, but at this event our aims is just to make our brand better known among the public,” he said.

To entertain the public, and for hotel staff to show their skills, 70 skills and competency competitions are being held throughout the show, with 300,000 baht in prize money up for grabs.

Among the competitions are bartender and wine butler contests, a cooking competition as well as contests in ice carving, flower arrangement, towel folding, spa treatment and engineering skills.

The itinerary for this afternoon (August 27) is:

The schedule of events for Sunday (August 28) is: