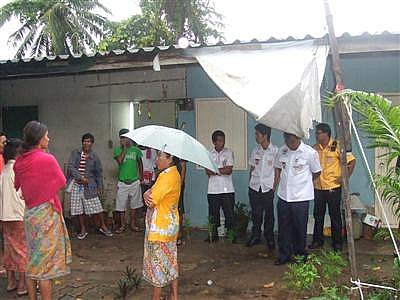 PHUKET: A man in debt to loan sharks and unable to find work was found hanged in his rented room in Phuket’s Thalang district this morning.

Thalang Police duty officer Somkhit Khawsang confirmed the identity of the deceased from the remains of his torn up Thai ID card. He was 27-year-old Sarawut Samosorn.

Mr Sarawut’s body was discovered by a friend. He was hanging by the neck from a support beam inside an unnumbered room behind the Esso service station in Baan Lipon, Srisoonthorn subdistrict.

Wearing only a pair of pajama bottoms, he had used a bed sheet to hang himself.

Although listed as a resident of Nakhon Sri Thammarat, the late Mr Sarawut had lived in Phuket for a long time, friends said.

He shared the modest accommodation with a live-in girlfriend from Phuket, who was at the scene when police arrived but crying too inconsolably for questioning.

Friends believe debt drove Mr Sarawut to take his life because he often complained of his financial situation and inability to find work.

Kusoldharm Foundation workers lowered the body and took it to Thalang Hospital, where it will remain until claimed by relatives.

This latest debt-related death follows the suicide of 40-year-old Sangob Ratpan, who hanged herself in the bathroom of her rented room in Rassada after coming under heavy pressure to repay 6,000 baht.