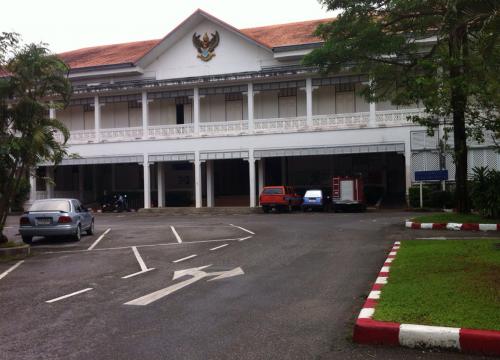 PHUKET: Protesters in Phuket have vowed not to attempt to close Phuket International Airport or bus stations on the island as they continue their campaign to garner support from government officers.

Last Wednesday thousands of protesters gathered at Phuket Provincial Hall demanding that officers walk away from their desks as a sign of support for the anti-government rally (story here).

Those working at Provincial Hall, as well as those at the Phuket Provincial Administrative Office (PPAO), complied (story here).

“I promise that our protesters will not close the airport or bus station. Many offices have closed, including Phuket City Municipality, Phuket Wittayalai School and Srinagarindra The Princess Mother School, Phuket,” protest co-ordinator Amnuay Kumban told the Phuket Gazette.

“Today, we will go to the Phuket Land Transportation Office [PLTO] and district offices to ask them join us,” he said.

Mr Amnuay assured the Gazette that he was leading peaceful protests.

“Our protesters are not carrying weapons – we are doing this peacefully,” he said.

“We will continue our protests until we get word to do otherwise from Bangkok. However, we will not fall into violence, as we want to preserve and protect the image of Phuket for tourists,” he said.

Though the Phuket Wittayalai and Srinagarindra schools have both closed, all schools operated by Phuket City Municipality have received orders forbidding them to shut their doors, a teacher at Baan Samkong School said.

Despite Provincial Hall being closed, officers are busily setting up an event in honor of the 86th birthday of HM King Bhumibol Adulyadej. The social event will start at 6pm tomorrow at Phuket Rajabhat University.

“We plan to be back at work on Wednesday. However, it will depend on the situation with concerns to the protesters,” a Provincial Hall officer told the Gazette.