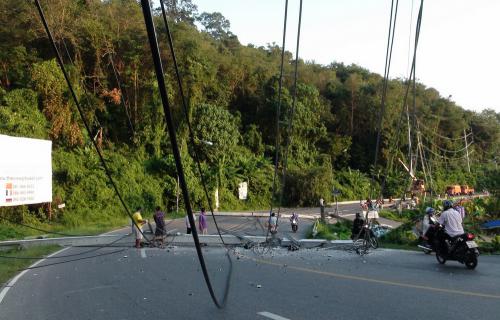 PHUKET: A mother and daughter were unharmed by a power pole that came crashing through the roof of their home on Kata Hill early yesterday morning.

The utility pole, which luckily had broken free from the live electrical cables attached to it when it fell, punched a hole through the car port roof attached to the house, explained homeowner Kanlaya Sripitak.

“My daughter and I were sleeping when a loud noise woke us at about 2:30am,” she said. “I was very scared, so I grabbed my daughter and ran out of the house.”

The pole was one of 12 pulled down by a large tree that had fallen onto the power cables near the top of the hill, causing a blackout in parts of Kata and Karon.

“The road was closed for several hours so we could clear the poles and power cables from the road,” a staffer at the Phuket Provincial Electricity Authority (PPEA) told the Phuket Gazette.

“In the meantime, we had to re-route power from Patong to help boost power supply to the area,” he added.

“Luckily, no cars or motorbikes were struck by the falling poles or cables,” the officer said.

Officers estimate that the falling tree caused damage totaling about one million baht.

“We are still checking with owners of the two houses to confirm what damage was caused so we can determine the amount of compensation to be paid out,” the PPEA officer said.