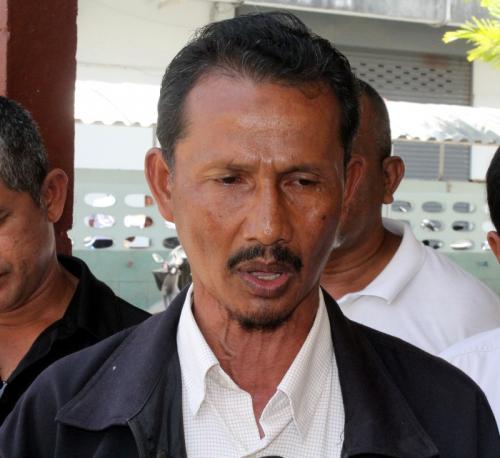 PHUKET: About 100 parents, students, community leaders and other Muslim residents from across Phuket gathered in front of Muslim Wittaya School on Thepkrasattri Road in Koh Kaew this morning to protest a teacher being sacked for taking unapproved leave to join the Hajj.

The protesters called for the school board to recast their decision to sack Parinya Payadsub, a respected Arabic language teacher at the school.

Samarn Kanungkarm, Imam of the Muslim community at Baan Para, in Pa Khlok, told the Phuket Gazette, “We want Mr Parinya to keep his job at the school. He is a very good teacher and he knows Arabic very well.”

Mr Parinya has joined the Hajj three times in the past five years. Muslims are required to make the journey to Mecca at least once during their lives, but many devotees make the journey more often. Pilgrims have 45 days to perform the rituals required to complete the Hajj.

However, the school board maintains a rule that teachers and other staff at the school are allowed to take time off to perform the Hajj only once within any five-year period.

Last year, Mr Parinya again joined the pilgrimage from Phuket, but without the approval of the school board.

On November 9, the school board set up a committee to review Mr Parinya’s unapproved leave.

The committee found that Mr Parinya’s actions were in breach of the school rules and his employment was ordered to be terminated, effective March 31.

However, the protest today has given the school board a moment of pause.

“We will still maintain the rule of school staff being allowed to take leave to join the Hajj only once every five years, but the board will review Mr Parinya’s circumstances again,” Srirat Ketmuang, chairman of the board, told the Gazette.

“I cannot make any promises that he will keep his job, but we will look into this as a special case,” he said.

The Gazette notes that Muslim Wittaya School is the largest Muslim school in Phuket and is home to the Islamic Council of Thailand’s Phuket office.